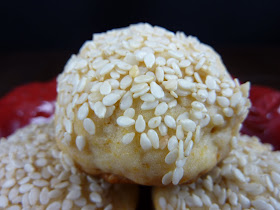 So what did the Romans eat, so many years ago? This probably isn’t something that you think about too often! History books don’t always talk about the everyday lives of the people, which is too bad because we could probably learn a lot. I just finished reading The Time Traveler's Guide to Medieval England: A Handbook for Visitors to the Fourteenth Century by Ian Mortimer. It’s written as though you were going to travel to 14th century England and it was absolutely fascinating. What would you expect to eat? What would you expect to see people wearing? If you’re into history at all, I recommend picking it up.

The book taught me a lot of things about not making assumptions. In 14th century England, fashion changed dramatically, mainly due to the invention of buttons. I would never have known that, making the assumption that people just wore what was available, that clothes weren’t a priority. I was very wrong. Having just read the book, I was interested in this cookie when my husband set me the recipe.

It’s a replica of cookies that the ancient Romans would have made. I didn’t know that Romans ate cookies, but they were a robust society and it makes sense that they would have sweets, too. There’s probably no way of knowing how authentic these are, but it’s nice to think about eating something that others may have made years ago. They are sweet and you can really taste the honey. They are kind of a cross between a cookie and pastry, and have a good texture. I had them with my morning coffee and they were a nice accompaniment.

In a bowl, combine flour, baking powder, salt, and baking soda. Set aside. In a large mixer bowl, combine butter, honey and eggs and mix until well combined. Gradually beat in the flour mixture. Cover and chill the dough about 1 hour or until firm.

While warm, remove cookies from baking sheets and brush with melted butter and then roll in sesame seeds. Cool on a wire rack.