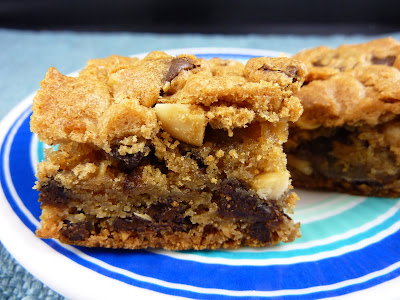 This week’s Tuesdays with Dorie recipe was selected by Nicole of Bakeologie. She chose the Peanuttiest Blondies and I love blondies so I was excited for this week! You can get the complete recipe on the Bakeologie blog. This blondie had the addition of peanut butter, peanuts and chocolate chips.

This recipe was super fast to make, which was nice given the busy Halloween weekend. I don’t think I would have had the time to put together an elaborate layer cake or something fancy like that. I really prefer the simpler recipes anyway. I had made a couple of other peanut cookies recently, so I had the peanuts on hand as well as all the other ingredients. I didn’t have to pick up any extra ingredients for this week’s selection, which was very nice.

You bake these blondies in a 9-inch square pan, which makes for a fairly thick blondie. I think I would maybe try baking these in a 9x13 pan so that the cookies are a little thinner. I liked the flavor of these although I’m not sure about the addition of cinnamon to the batter, I don’t know that I like cinnamon with peanuts. I took these in to work and they were a big hit, so guess they tasted ok! Thanks Nicole, for picking such a tasty recipe.

Recipe from Baking from My Home to Yours by Dorie Greenspan, page 119.
Posted by Nicole at 6:00 AM

Great picture. I liked the cinnamon okay, but I will probably skip it next time.

I'm with you on the cinnamon. It didn't thrill me. But I still keep eating them! Have a great day.

These look so great! I like the thickness, I'm a thick-bar kind of gal!

I didn't use cinnamon :)

These look really good, but I'm with you...I think I'd leave out the cinnamon. :)

Oh my goodness do they look scrumptious!! I could not taste the cinnamon.

Can you believe someone at my office could actually pick out the cinnamon... I could barely taste it! Yours look great! Thanks for baking along ;)