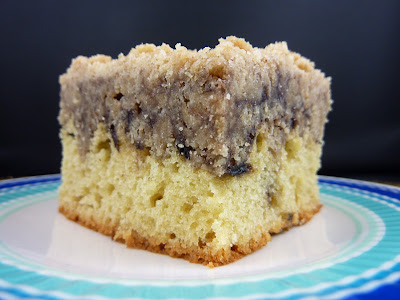 I’m so excited that the local farmer’s markets are going to start up fairly soon! While it’s still cold and rainy here in the Seattle area, I know that someday the weather will get better. I’ve picked up my fair share of interesting ingredients at the farmer’s market. My favorite vendor is one that sells really interesting preserves. I’ve used their raspberry orange chocolate preserves before and I have had 2 jars sitting at home waiting to be used: blueberry chocolate and raspberry chocolate.

I saw this recipe in a recent Martha Stewart Living magazine and I knew I had found a use for the blueberry chocolate sauce that I had. The picture in the magazine shows this crumb cake with a layer of jam between the cake and the crumble, but you have to read a tiny footnote to see the variation with the jam. It even recommends blueberry jam, so I was set!

This is a substantial cake, requiring an entire pound of butter and over 5 cups of flour! It came together fairly easily though. I was glad that the crumble was made with melted butter because it would have been really hard to cut that much butter into the flour. My blueberry chocolate sauce was a tad thinner than jam but it worked just fine. (And you could really add any sort of jam or preserves that you wanted.) This smelled so good when it was baking that I couldn’t wait for it to come out of the oven. This cake has it all: great aroma, flavor and texture. The chocolate from the blueberry chocolate sauce wasn’t very pronounced, but it added a little something extra.

Make the crumb topping: in a large bowl, combine the flour, sugar, brown sugar and cinnamon. Pour the melted butter over the mixture and mix, using your hands, until medium to large clumps form.

In a small bowl, combine the flour, baking soda, and salt. In a large mixer bowl, combine the butter and sugar. Beat on medium until light and fluffy, about 2 minutes. Beat in the eggs and yolks, one at a time, and then the vanilla. Beat in flour mixture in 3 additions, alternating with the buttermilk. Continue to beat until well combined.

Spoon batter into the prepared pan. Top with blueberry jam and then sprinkle the crumb topping evenly over the batter.

Bake until golden brown and a toothpick inserted in the center comes out clean, about 1 hour. Allow to cool before cutting into squares.

Recipe from Martha Stewart Living
Posted by Nicole at 6:00 AM

I'm intimidated by all the butter. ;) It looks fabulous!

Look at that crumb layer! I am absolutely in awe. It looks delicious!

Wow! This looks so rich and delicious. Pampered Chef now sells a Raspberry Chocolate Sauce. It is to die for. This could be good.