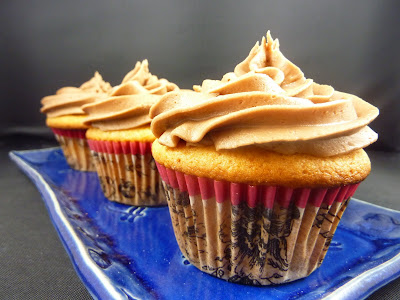 After frosting the Brown Sugar Hazelnut Bundt cake, I realized that I had a huge quantity of Nutella frosting left over. I figured that I would just bake something else to use it up. It’s a bit of a vicious circle, kind of like when I made things to use up ingredients that I have in the cupboard. I usually have to buy other ingredients to make whatever recipe I pick, so I don’t think I ever really get ahead. I wanted to find a recipe that would avoid that problem.

I thought about what flavors would go with Nutella, and I decided that honey would work well. I went out to search for a honey cupcake recipe and many of them were quite complex, with roasted peanuts, or peanut butter and honey or some other combination. This was actually the first recipe that I came across and it was perfectly simple. Since we’re such big fans of honey in our household, I knew that I had honey and all of the other ingredients were staples so I was set!

The cupcakes came together with no problem, but the batter is mixed more in the manner of making cookie dough than cake batter. I seemed to work and they baked up perfectly. Sometimes with honey you have to be careful and make sure it doesn’t burn, but no worries here. I had made the frosting already and just needed to bring it to room temperature. This frosting recipe makes a ton so you certainly want to make half (or less) of a batch. It’s weird to make, where you mix all the dry elements before adding any liquid. I was concerned I was going to burn out the motor of my mixer so I added some heavy cream earlier in the mixing process. I added quite a lot of heavy cream to get the right texture, so just go with what feels right. This frosting is just about the best thing I’ve ever tasted and is a nice complement to the honey cupcakes. This combination is a winner!

Preheat the oven to 350 degrees. Line a 12-cup muffin tin with cupcake papers.

In a large mixer bowl, cream the butter and sugar until light and fluffy. Mix in honey, eggs, buttermilk and vanilla. Combine the flour, baking powder and salt. Mix into the batter until just blended. Scoop the batter into the cups evenly.

Bake for about 20 minutes or until the tops spring back when lightly pressed. Cool in the pan for about 10 minutes and then remove to cool on a wire rack.

Make the icing: In a large mixer bowl, cream the butter and Nutella until well combined. Slowly add in the powdered sugar, and continue creaming until well blended. You may need to add some cream to the mixture to lessen the stress on your mixer.

Add salt, vanilla, and more heavy cream. Blend on low until moistened. Add additional heavy cream until you reach the desired consistency. Beat at high speed until frosting is smooth and fluffy. Frost the cupcakes or pipe the frosting on the cooled cupcakes.

Cupcake recipe from White House pastry chef Bill Yosses via Oprah.com
Frosting recipe from My Baking Addiction
Posted by Nicole at 6:00 AM

Extra Nutella frosting? That's quite the dilemma. It sounds like you found the perfect solution!