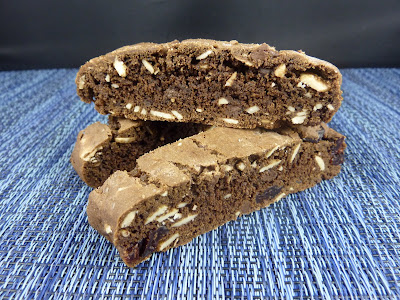 This week’s Tuesdays with Dorie recipe was picked by Jacque of Daisy Lane Cakes. She chose Chocolate Biscotti. Dorie’s biscotti are full of chocolate chips and almonds, and I decided to add cherries, which was one of the variations. You can get the complete recipe for these on Jacque’s blog. I like biscotti, but they aren’t as rich as decadent as other cookies. These have enough add-ins that they just might win over the skeptics that think that biscotti are too dry.

I made a half batch of these, which still makes a nice batch of cookies. It doesn’t seem like the dough will come together since there isn’t much butter and just an egg to hold everything together. The dough did come together, but mine was super sticky! I really had trouble forming it into shape for the first baking. I had to flour the counter, which I didn’t want to do with a chocolate cookie, but I really had no choice. Once I got the cookies shaped, they baked up just fine. They even weren’t too crumbly when I sliced them, which is a problem that I have with biscotti sometimes.

You can also dip these in chocolate, but I decided not to since I had already added so many ingredients to the cookies. These cookies aren’t too sweet and the dried cherries add a nice sweet/tart flavor. If you wanted a sweeter cookie, I think dipping them in chocolate would be good. Mine aren’t as dry as some biscotti that I have had and I’m happy about that. I can’t say that these would really hit the spot when I am craving a homey, decadent cookie, but they are very nice. 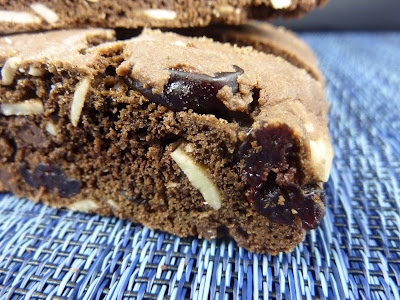 Recipe from Baking from My Home to Yours by Dorie Greenspan, page 144
Posted by Nicole at 6:00 AM

the nuts peeking thru make these beautiful!
Buttercreambarbie

Yours look great! Mine disappeared really fast and so I ended up baking Dorie's Classic Brownies today. My son just exclaimed, "Whoa! Almost too chocolatey!" And his girlfriend happily had another.

They look fantastic! I shaped mine right on the parchment so I could avoid adding flour. Sticky but it worked.

I'd like to try these with the cherries. This was definitely a sticky dough! I shaped it right on the parchment because I didn't think I'd be able to move it after I formed the log.

I bet they were delicious with the cherries!!!! Great job! I enjoyed these!

I love the addition of dried cherries - chocolate and cherries is a winning combination.

The dried cherries was a great idea. They look just perfect.

The dried cherries are a great addition.

I love the cherry addition in your biscotti. Beautiful cookies!