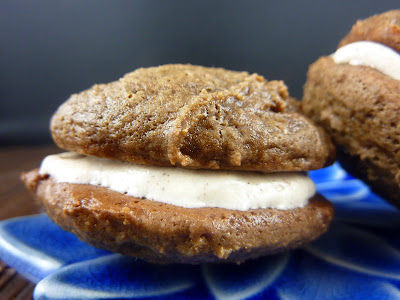 This week’s Tuesdays with Dorie recipe was selected by Spike of Spike Bakes. She chose Sour Cream Chocolate Cake Cookies. These are soft, cakey cookies with some sour cream in the batter. Although they contain some unsweetened chocolate and cocoa powder, the chocolate flavor isn’t that pronounced. I changed these up a bit, but you can check out the complete recipe on Spike’s blog and also check out the links from all of the Tuesdays with Dorie bloggers; I think there will be quite a few innovative variations this week!

I made these cookies as the recipe specified, but I had read that others thought they were a little plain so I had already decided that I was going to make sandwich cookies. I left out the currants, since I wanted a clean chocolate canvas for the sandwiches. What type of filling to make? At first I was going to pair the cookies with raspberry jam, but my husband suggested some sort of filling with marshmallow fluff and with cinnamon. I tracked down a recipe for marshmallow fluff frosting and added some cinnamon to the mix and it tasted pretty good so I went with that.

The cookies themselves are a little plain. The dough is quite sticky and they are a touch sticky even after baking. They are nice and soft, almost like whoopee pies. Sandwiched together with the cinnamon filling they are extraordinary! The cinnamon pairs nicely with the chocolate and they are great. Frosting made with marshmallow fluff is fairly soft, which worked well with the soft cookies. These are one tasty sandwich cookie! Here’s the recipe for the cinnamon filling:

In a medium bowl with mixer at medium speed, beat butter ingredients until light and fluffy.

Cookie recipe from Baking from My Home to Yours by Dorie Greenspan, page 160

Filling recipe from Marshmallow Fluff Cookbook
Posted by Nicole at 6:00 AM

These look incredible with the frosting, what a great addition!

Ooh, nice filling idea! I'm not a fan of cinnamon with chocolate, but I bet it would be easy to experiment with different flavors. And my girls would love it, since they love anything marshmallow.

Want to mail me a bucket of that frosting?? It sounds amazing! :)

Ooooh, that looks so good. I love chocolate and cinnamon.

Your cookies are puffy - mine were flat as a pancake. Oh well, I think both versions are fab. And of course, I adore your icecream sandwiches.

Wow, the marshmallow cinnamon fluff filling sounds great! I was thinking either a caramel or a cream cheese filling would be good too...lots of options to try for next time!

The cinnamom filling looks sooo good!! Great cookies! I hope to bake them some day!

Wow, Nicole, those look really great. That filling makes them look totally different and see, then I would eat them because I don't like chocolate, but I do like the sounds of that filling, so I could lick that off the cookies and be smiling and happy! :-) Great job!

Yum, a marshmallow filling was a brilliant idea! These were a bit too plain on their own.

The cinnamon filling is inspired.