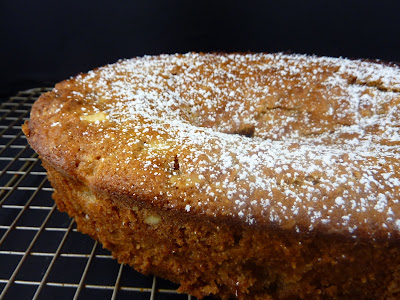 This week’s Tuesdays with Dorie recipe was picked by Katrina of Baking and Boys. She chose Apple Nut Muffin Cake, which Dorie says were supposed to be muffins, but instead the batter was put in a pan and baked as a whole. I resisted the temptation to cut the recipe in half and make smaller cakes, since that would be contrary to the intent of the recipe! You can get the recipe for this cake on Katrina’s blog and don’t forget to check out the Tuesdays with Dorie site to see all the posts about this week’s recipe.

I’ve been waiting for this recipe to be selected because I love apples and I love muffins and I figured everything rolled together would be great. The original recipe called for nuts and raisins in addition to the apples, but I decided to substitute caramel bits to make this a caramel apple creation. I’m not sure that worked as well as I’d envisioned, as the caramel bits don’t stay soft after the cake bakes and cools. Still not bad, so I was glad I tried it.

I baked my cake in an oval baking dish, which I thought was about the same size as the 8” square pan that the recipe specifies, but I think maybe my pan was too small. The cake didn’t quite bake all the way through, so it sank in the middle once it cooled. This seems to happen sometimes when you bake with apples. I also think that I had too much apple and not enough batter. Apples in Washington State are huge and I’m sure bigger than Dorie’s medium apple. While this wasn’t a complete success, the flavors were great and I’m glad I made it.

Recipe from Baking from My Home to Yours by Dorie Greenspan, page 37
Posted by Nicole at 6:00 AM

looks so good! caramel... you def can't go wrong with that!

Sunk or not, that is one delicious looking cake. I wish I had put those caramel chips in mine! Sounds great.

SOrry for the little mishaps..at least it tasted good! I drizzled caramel over the top and loved it!

I was contrary and made it into muffins. I've had trouble with apple cakes not baking fully too - maybe the apples are just too moist sometimes.