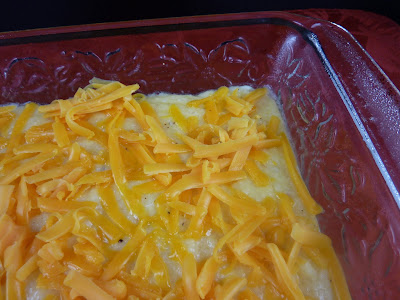 I received this recipe in this round of the recipe swap, which this time had the theme of Thanksgiving sides. One of the reasons that I participate in the recipe swaps are to try new things. I just never know what I’m going to end up with, but I’m ok with that! It expands my horizons and that can’t be a bad thing. If I don’t like something, I just move on. Luckily so far I’ve had pretty good luck with the recipes I’ve gotten in the recipe swap. This time, I got a recipe from Heather Lynne at Hezzi-D’s Books and Cooks.

When I got my recipe for baked garlic cheddar grits, I didn’t quite know what to say. Grits? I’m from Seattle; do they even sell grits at the store here? I’ve only had grits once, at a local restaurant that is run by a southern chef. I liked the shrimp and grits I got there, so I figured this would be interesting. One morning after breakfast my husband and I stopped at this different grocery store and they did have grits there. They were quick grits, which I hoped would be ok for this recipe. I really know nothing about grits, but I figured it couldn’t turn out that bad.

This was really easy to make. I tried to make it a little healthier, but by no stretch of the imagination is this healthy. It’s a Paula Deen recipe, for goodness sakes! I used a little less cheese, probably 6 ounces rather than 8 ounces and I only used 1 tablespoon of butter rather than 2. I think you could leave out the butter and could likely use reduced-fat cheese. This is gooey and decadent and very, very tasty. This recipe really put me outside of my comfort zone, but I really liked it. I’m glad I gave it a try!

Preheat the oven to 350 degrees. Grease a 9” square baking dish.

Bring the broth, salt, pepper, and garlic powder to a boil. Stir in the grits and whisk until completely combined. Reduce the heat and simmer for about 5 minutes or until the grits are thick.

Add in the cubed cheese and milk. Stir until totally melted. Gradually add in the eggs, butter, and garlic, mixing until everything is well combined.

Pour the grits into the prepared pan and top with the grated cheddar cheese. Bake for 35-40 minutes or until the cheese is golden brown and the grits are set.

Recipe from Heather Lynne at Hezzi-D’sBooks and Cooks, who adapted the recipe from Paula Deen
Posted by Nicole at 6:00 AM

This sounds like a great recipe. I'm glad you tried something new. :)

Thanks for being part of the recipe swap!

I'm so glad you liked them! I never really had grits much either, but my brother requested them and they were delicious! It's funny you cut down the cheese and butter, because I really cut it down from the original recipe!