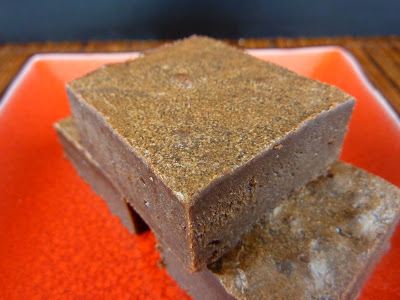 The first of this week’s Tuesdays with Dorie recipes was selected by Leslie of Lethally Delicious. She chose Bittersweet Brownies, which are fudgy, dark chocolate brownies. These are very simple: just butter, chocolate, eggs, sugar, flour and some flavorings. I was very tempted to add something else to these brownies, but that would have missed the point. These brownies are all about chocolate in its simple goodness, and they certainly deliver. You can get the complete recipe for these cookies on Leslie’s blog.

As I said, I didn’t change this recipe at all. I did cut the recipe in half and baked it in an 8” square pan. I had read that some of the other Tuesdays with Dorie bakers had trouble with the brownies being done, as Dorie expressly states to bake them no longer than 22 minutes. I did bake mine for about 35 minutes because otherwise they would have been brownie soup! They just looked done at that point and still tested as being very fudgy, so I knew they would still be nice gooey, fudgy brownies. I then refrigerated the brownies overnight before cutting them.

When I cut the brownies, they were super cold and it seemed like I was cutting fudge rather than brownies. They got gooier* as they came to room temperature, but they still came across as fudge-like rather than brownie-like. But that’s ok, they are tremendously good. The chocolate flavor is intense and I could really taste the espresso powder that I added. I can’t usually pick that out when I add it to chocolate desserts, but this time I could. These are decadent, rich brownies, and if you’re looking for a chocolate fix they won’t disappoint.

Recipe from Baking from My Home to Yours by Dorie Greenspan, page 90

*Microsoft Word says that “gooier” is a word. I’m not sure…
Posted by Nicole at 6:00 AM

gooier is SO a word! maybe they prefer gooeyer?

Wow - those might be the fudgiest brownies I've ever seen - and that's a good thing.