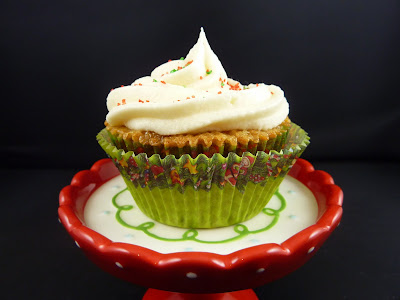 Merry Christmas! I’m always looking for new ways to use mincemeat, since I’m such a fan of the flavors of mincemeat. I came across these cupcakes and thought that they would be great. I ended up sharing them with people at work. It’s a good way to introduce people to mincemeat. I have to saw that these generated a lot of conversation, because many people think that they contain meat, but of course now it is made with apples, dried fruits and spices.

These are great cupcakes, very moist. You can use any liquor in the frosting, and I used Grand Marnier since I thought that would go nicely with the spices in the mincemeat. One of my friends at work doesn’t like orange and she thought that the Grand Marnier was good. These are festive and a great way to share the flavors of the season with friends and family.

Preheat the oven to 350 degrees. Line a muffin pan with paper liners.

In the large mixer bowl, cream butter, sugar and vanilla until light and fluffy, then beat in eggs, one at a time, beating well after each addition. Add the fruit mincemeat and stir until well incorporated. In a small bowl combine the flour, corn starch, baking powder and salt; carefully fold the mixture into the butter mixture – do not overmix.

Spoon the batter into the muffin cups, filling each two-thirds full. Bake for 15-18 minutes or until risen and golden and a toothpick inserted in the center comes out clean. Cool in the pan for 10 minutes then carefully transfer to a wire rack to cool completely.

Make the icing: in the large bowl of an electric mixer, beat the butter until creamy, add the milk and vanilla and beat until light and fluffy. Gradually beat in the powdered sugar, and then beat until you have a smooth, light and creamy buttercream. Stir in the brandy. Pipe the buttercream onto the cooled cupcakes.

Recipe from Technicolor Kitchen
Posted by Nicole at 6:00 AM