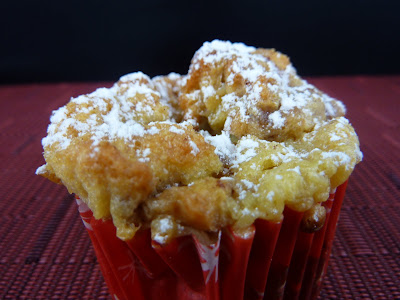 The Grand Central Bakery is a local institution with locations in Seattle and Portland. I’ve had their cookbook for over a year, purchasing it on the recommendation of a friend. I’ve only made a couple of things from it because, while the recipes sounded good, I hadn’t really been to a Grand Central location to see the baked treats in action. My sister in law just moved to a new place in Portland and they live one block from Grand Central Bakery and we stopped in to take a look. Wow! I will be making many things from this book. Everything looked so good!

I actually made these muffins right after Christmas, and I dressed them up for the holidays. I’ve just given you the original recipe here, but I made mine with cinnamon chip bread, nutmeg, and eggnog in place of the heavy cream. In all honesty, you couldn’t taste the eggnog all that much, but they were still very good. I wasn’t sure how bread pudding, which is traditionally quite soft, would work as a muffin, but it did. If you like really custardy bread pudding, this isn’t it. I’m ok with that as I like bread pudding a little on the drier side.

This was supposed to make 12 regular sized muffins, but I made 18 regular muffins. Maybe mine are small; the ones at the bakery did look a little bigger. Fill them really full and they will look great. The ones that we’re as full looked a little scrawny. They kept fresh for a couple of days, but they were best when warm and fresh. So if you find yourself with some extra bread at home, these muffins are a really tasty way to use it up!

Cut the bread into 1-inch cubes. Put the cubes in a large bowl and toss with the cinnamon.

In a separate bowl, whisk the eggs, sugar, heavy cream, milk and vanilla. Pour the egg mixture over the bread cubes. Stir to combine. Cover and refrigerate for at least 4 hours (or overnight).

Scoop about ½ cup of the bread pudding mixture into the paper-lined muffin tins. Each cup should be fairly full.

Bake for 45 minutes, rotating the muffins half way through the baking time. The muffins will be light golden brown when they are done. Dust with powdered sugar while warm.

Recipe from The Grand Central Baking Book by Piper Davis and Ellen Jackson
Posted by Nicole at 6:00 AM