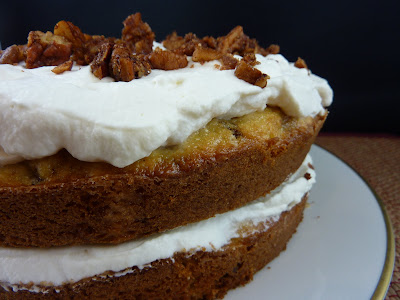 I made this cake for a colleague’s birthday. I love making cakes for people and I try to pick something that I think they will enjoy. Most of my colleagues are female but this cake was for one of my male colleagues, so I didn’t want anything too fluffy. I figured pecans are always a good choice, and the same can be said for alcohol-spiked whipped cream.

This cake is a simplification of a Martha Stewart recipe: her cake was 3 layers and had a browned butter pear filling. I knew that would be good, but make the cake a bit on the fragile side. I know 3 layer cakes are hard to transport so I found this cake recipe from Dorie Greenspan’s book and used it instead. I just added the candied pecans. It turned out great!

Making candied pecans has to be about the best smelling thing ever. My house smelled so good! I actually made this cake twice; I made it for his actual birthday but work was cancelled due to the snow and ice we had. It wasn’t fresh by the time we went back to work so I made a new cake to take. So my husband and I got to try to the cake by itself and it was so tasty without the bourbon whipped cream. Together with the whipped cream, it was fantastic. The recipe may look longer, but it was very easy to put together. The next time you need a celebration cake, give this one a shot!

Candy the pecans: Preheat the oven to 400 degrees. Toss together the pecans, butter, brown sugar, vanilla, cinnamon, and nutmeg; spread on a rimmed baking sheet. Roast, stirring once, until toasted, about 10 minutes. Let cool.

Make the Cake: Preheat the oven to 350 degrees. Butter two 9-inch round cake pans and dust with flour. Line the bottom of the pans with waxed paper.

In a small bowl whisk together the flour, baking powder, baking soda and salt. Set aside. In a large mixer bowl, cream the butter until light. Add the sugar and beat on medium for 3 minutes. Add the eggs and egg yolk, one at a time, beating for one minute after each addition. Stir in the vanilla.

Bake the cake for 25-30 minutes, until a toothpick inserted in the cake comes out clean. Allow the cake to cool for 10 minutes in the pans before removing to a wire rack to cool completely.

Make the whipped cream: Whisk cream, bourbon, and powdered sugar with a mixer on medium-high speed until soft peaks form.

Recipe inspired by Martha Stewart. Cake recipe from Baking from My Home to Yours by Dorie Greenspan.

The cake look beautiful and veryyyyyyyyyy delicious
I wish I could taste a slice or two (or three....)