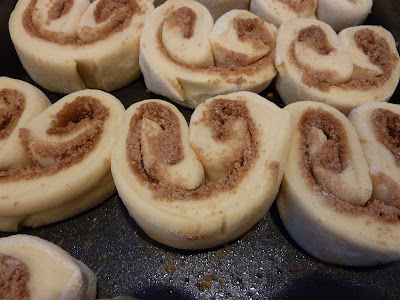 My husband requested cinnamon rolls for Valentine’s Day. We had both seen these cute heart-shaped cinnamon rolls on Pinterest and I figured that I could make those. With the new microwave oven that also works as a proofing oven, I’ve been very excited to make yeast breads. Yes they take time, but it’s really easy to get everything to work beautifully.

This dough was a little different than the bread I recently made for Tuesdays with Dorie: it was richer with more butter and the addition of eggs. This dough gave my mixer a good workout and I had to mix it on medium-low or it was going to end up all over the counter. This seemed a bit on the dry side and quite firm before putting it in the bowl to rise, but it was nice and fluffy after rising. It was hard to shape into a rectangle, as the dough was so elastic. I guess that means I made it properly! I eventually got it to some semblance of a rectangle. 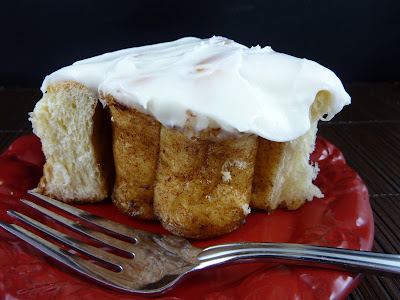 This recipe called for a tiny bit of frosting, so I doubled the quantity (I’ve given you the doubled recipe here) and had plenty of frosting. Cinnamon rolls are all about the frosting, right? My frosting was runny so I added more powdered sugar. These are nice, big cinnamon rolls and they are really great with the extra frosting. I thought that they could have used a little more cinnamon, but I think that was because I made them heart-shaped and the cinnamon wasn’t evenly distributed. They were very good and I think my husband was happy!

Make the dough: whisk together the buttermilk, butter and the beaten eggs. In a large mixer bowl combine 4 cups flour, the yeast, and the salt. Mixing with a dough hook, stir on low. Add the buttermilk/butter mixture and mix until the dough comes together, about 1 minute.

Increase the speed to medium and knead until the dough is smooth and elastic, about 10 minutes. Add more flour, 1 tablespoon at a time, after 5 minutes if needed.

Turn the dough out of the bowl and knead it into a ball. Place in a lightly oiled bowl and cover with plastic wrap. Allow to rise in a warm place until double, about 2 hours.

Make the rolls: In a small bowl combine the brown sugar, cinnamon, and cloves. Turn the dough out onto a lightly floured counter. Shape the dough into a 12” x 16” rectangle. Brush with melted butter and then sprinkle with the brown sugar mixture. Starting on both sides, roll the long ends of the rectangle towards the center. Slice into 12 rolls.

Place the rolls into a greased 9” x 13” pan, taking care to shape the rolls to resemble a heart. Cover with plastic wrap and allow to rise in a warm place until doubled, about 1 hour.

Preheat oven to 350 degrees. Remove the plastic wrap from the pan and bake the rolls until golden brown, about 25 minutes. Flip the rolls out onto a wire rack and cool for 5 minutes.

Recipe from America’s Test Kitchen Family Cookbook
Posted by Nicole at 6:00 AM