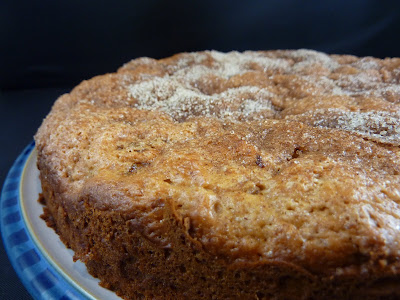 As I mentioned last week, for Spring Break I went to Palm Springs, California and stayed in a condo with my husband, parents, and my brother and his family. We had visited Palm Springs three years ago and one of the places we visited was Shields Date Garden. Of course we had to go back again! This time we tasted the dates and liked the honey dates so we bought some of those and brought them home. I also bought some date preserves that I need to figure out how to use.

I decided to make this date coffee cake, which comes from a cookbook that I had bought way back in 1999 on a family vacation. I love to pick up cookbooks when I travel because every time I use the cookbook I think about that trip and all the good times that I had. This is a cookbook of recipes from local folks, which are usually really great. I don’t think that dates are as popular as they once were which is too bad because dates are so sweet and good.

I used the whole dates that I bought at Shields, so I had to pit and chop the dates, which is tricky because they sticky little things. Measuring them isn’t super precise, but I suppose that’s ok. I like the combination of the sweet dates with the tartness of the sour cream. The first time I used dates it was in a sour cream date bar (I wonder where that recipe is…). This cake smelled divine while baking and was just a superb coffee cake. This cake would work with any sort of dried fruit, but if you’ve not tried dates, I really suggest you give them a try. They are wonderful!

In a large bowl combine the flour, sugar, baking powder, baking soda, cinnamon and nutmeg. In a separate small bowl combine the sour cream, oil, and eggs. Add the egg mixture to the flour mixture and stir just until combined; don’t worry if the batter is lumpy. Stir in the dates.

Spread the batter in the prepared pan. Combine the 2 tablespoons sugar and the ¼ teaspoon cinnamon; sprinkle on top of the batter.

Bake for 40-45 minutes until a toothpick inserted in the center comes out clean. Cool until warm and remove from the pan.

Recipe from Coffee Cakes: 105 Wonderful Recipes
Posted by Nicole at 6:00 AM

love coffee cakes! thanks for the recipe...

Another delicious recipe for today, im googling lots of coffee recipe for my compilation.