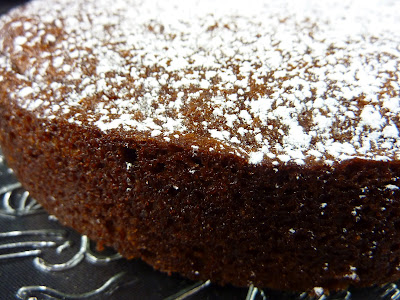 Whenever I have a large jar of jam or preserves, I use part of it in a recipe and then the rest usually goes bad in the back of the refrigerator. This is true with applesauce, too. Now sometimes I end up using the little 4 ounce cups of applesauce that are meant for lunchboxes, but recently I used some nice applesauce that my husband had picked up at Whole Foods. I used half of it and then it’s been sitting in the fridge…


I hadn’t made a coffee cake to take on Monday for a while so I figured that there had to be some cake I could make that used the rest of the applesauce that I had. This recipe was just perfect because it uses pantry elements and I didn’t need to buy anything special for this. Plus I had a new kitty cake plate that I wanted to use that my friend at work gave me! 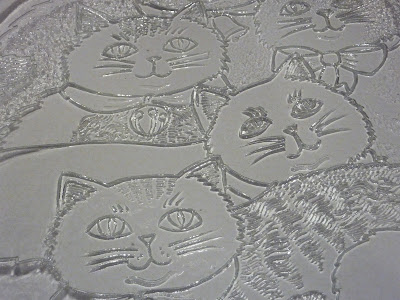 The method for making this cake was a little different: cream the butter, sugar and eggs and then stir in the flour and at the end you add the applesauce. Once you add the flour, it gets kind of clumpy but it works out when you add the applesauce. The house smelled wonderful when this was baking, and it makes you think of fall. (I love fall baking!) Apples and cinnamon are flavors that I love all year ‘round.

Preheat the oven to 400 degrees. Grease an 8-inch round cake pan. Line the bottom of the pan with a round of parchment paper; grease the paper. Set aside.

In a large mixer bowl, cream together the butter, sugar and brown sugar until smooth. Add the egg and beat until well combined. Add the vanilla.

In a small bowl, stir together the flour, baking soda, cinnamon, nutmeg, and salt. With the mixer running on its lowest setting, add the flour mixture one spoonful at a time until it is fully incorporated into the butter mixture. Add the applesauce and mix to combine.

Pour the batter into the prepared cake pan and spread it out so that it's evenly distributed. Bake for 25 - 30 minutes, until a toothpick inserted in the center comes out clean.

Allow the cake to cool for 10 minutes in the pan before removing it from the pan to cool completely on a wire rack. To serve, sprinkle with powdered sugar.

Recipe from Amazing Moms
Posted by Nicole at 6:00 AM

We've recently launched the site RecipesUS.com where users can search through hundreds of thousands of recipes from American food sites and food blogs.

We noticed that you have a great number of tasty recipes on your blog (url) and we would like to suggest you have a look at our Top Food Blogs section here: http://www.recipesus.com/top-food-blogs

If you want to add your food blog to the list and have your recipes indexed on RecipesUS.com, all you have to do is follow the instructions here: http://www.recipesus.com/add-your-food-blog

Our concept is already live in Sweden, Denmark, Norway and Spain, and we deliver thousands of visitors to food blogs daily. Some of the top food blogs receive 20,000+ visitors from us on a weekly basis.

Hopefully your food blog will be up there in the top!