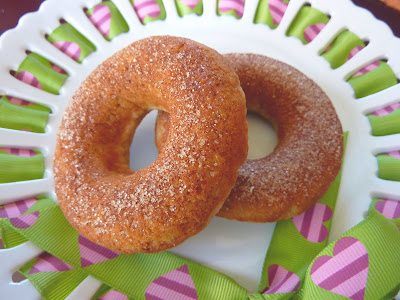 For this round of the recipe swap, it was a blogger’s choice theme where we get to pick any recipe from the assigned blogger’s blog. I got Nicole’s blog Prevention RD. I love her blog and have followed her for a long time so it was a big challenge to pick one recipe that I wanted to make. Well, I couldn’t pick just one recipe but I’m posting this one: Baked Apple Cinnamon Doughnuts. (Or are they donuts? Hmmm.) I also made the Skillet BBQ Chicken Pasta for dinner one night. It was so good!

It makes sense that I made this recipe, because this was one of the recipes that I saw that had eventually inspired me to buy a doughnut pan. These are really easy to make and I made them on Saturday morning and took them to ballet class. I figured they were healthy and they were enjoyed by all.

I made 20 donuts with this amount of batter. I always pipe my batter in the pans, since that is a lot neater. I should have been more heavy-handed with the cinnamon sugar, because I felt that there could be more of that. While these are baked and aren’t as decadent as a fried, frosted, filled doughnut, they are still very good and fill that sweet cake craving. Thanks for such a great recipe!

Combine applesauce, egg, oil, and sugar in to a large bowl and mix well. Slowly incorporate the rest of the ingredients, mix well, but be sure not to over mix.

Place about 3 tablespoons of batter into each donut mold. Bake for 8-9 minutes.

While the doughnuts are baking, combine the sugar and 1 teaspoon cinnamon in a small bowl, set aside.

Allow the doughnuts to cool for a few minutes before removing from the pan. Spray the tops of the doughnuts very lightly with cooking spray and dunk into cinnamon/sugar mixture.

GREAT photo - it is absolutely beautiful and looks delish!

just another reminder that I need to try making them!

Yum! I love cinnamon and apples and doughnuts, so these will have to be made in my house soon!

A donut pan would be so dangerous in my house. These look awesome.

Great post. I was wondering if you would like to put up a link to this apple recipe in my Food on Friday Series.