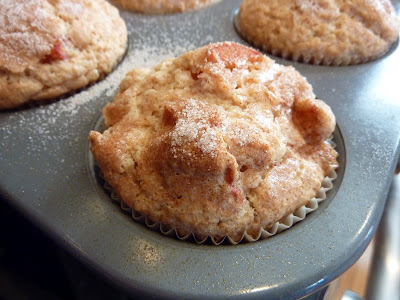 After our trip the other week to buy rhubarb, I now have a supply of it in the freezer. My dance teacher mentioned that she really loves rhubarb and had been unable to find it in the store. She was right, that was why we had taken a bit of a trip to get some. Since I often bring her treats when I go to dance class, I figured that I would make something for her with rhubarb. This muffin recipe seemed just perfect.

I like making muffins, but they seem to get hard so quickly that I am often hesitant to make them as I typically bake in the evening and take them the next day. I had enough time to bake these in the afternoon before my evening ballet class, so they were still slightly warm. Muffins are at their best when they are still warm! She loved them and was so happy I made something with rhubarb.

These muffins retain the tartness of rhubarb, which is quite powerful for some folks. The cinnamon sugar topping offsets the tartness nicely, so you get the sweet, too. When writing up this recipe I realized that I left out ½ teaspoon of baking soda, but the muffins turned out just fine and seem to raise plenty with just the baking powder. Usually baking isn’t quite so forgiving, but I lucked out this time.

In a large mixing bowl, combine the flour, sugar, baking powder, cinnamon, and salt and whisk to blend. In a separate bowl, whisk together the sour cream, eggs, melted butter, and vanilla until smooth. Stir the sour cream mixture into the flour mixture with a spatula until the batter just comes together; do not over mix. Gently stir in the rhubarb. Divide the batter among the muffin cups.

Sprinkle each muffin with cinnamon sugar. Bake the muffins 18-22 minutes, until golden brown, and a toothpick inserted in the center comes out clean. Cool in the pan for 5 to 10 minutes and then remove from the pan and allow to cool on a wire rack. Serve warm.

Recipe from Inspired 2 Cook
Posted by Nicole at 6:00 AM