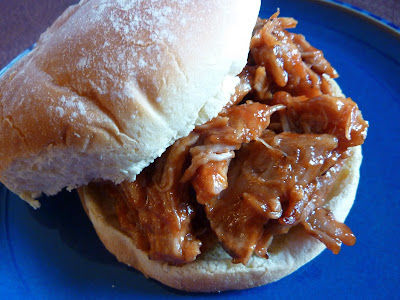 For this round of the recipe swap, the theme was “Too Hot to Cook.” This theme leads to a lot of possibilities, and I was given this recipe for pulled pork from Coleen at Does Not Cook Well with Others. Cooking things in the slow cooker is a great option for the summer because it doesn’t really heat up the kitchen. I always forget to use mine even though it is sitting out on the counter.

I had made pulled pork before, but using quite a different recipe. It uses lean pork loin, so this is fairly healthy, too! It seems like I can never find quite the right cut of meat at the store, but I found a lean pork loin that was the right size and it worked great. I have a big slow cooker, so I ended up using 24 ounces of (sugar free) root beer so that there was plenty of cooking liquid. I also omitted the cayenne from the original recipe because I don’t care for heat that much.

This was a really great dinner. And since there are just two of us, it made sandwiches one night and then we made taco/swap sandwiches with the leftovers. I’m not sure that I could pick out the root beef flavor, but my husband could. I didn’t taste the meat before adding the barbeque sauce, so maybe that’s the difference. I really enjoyed this and I will certainly make it again. Thanks for the recipe Coleen!

Season the pork with salt and pepper to taste. Sprinkle on the paprika and garlic powder. Place in your crock pot. Pour the root beer into the crockpot, and cook on low for 5-1/2 hours.

After 5-1/2 hours, remove pork to a cutting pork and use two forks to shred the pork. Drain the root beer from the crockpot. Place shredded pork back in crockpot, and pour in the barbecue sauce. Stir to combine. Set temperature to low, and cook for another 1 ½ hours.

Recipe from Does Not Cook Well with Others
Posted by Nicole at 4:00 AM

Glad you liked them!

Oh this recipe is a classic and keeper, for sure! It's always been my go-to for pulled pork.

This looks delicious--I do love a good crock pot dish! Can't wait to try it.