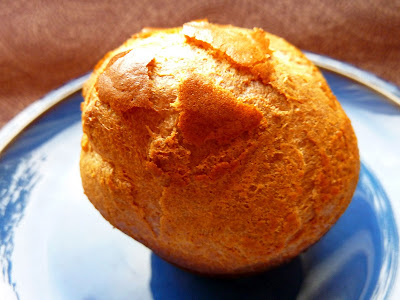 This week’s Tuesdays with Dorie recipe is popovers. I was really excited to make these because I would love to make these popovers (also known as Yorkshire Puddings) when I make a roast. This week’s recipe is hosted by Paula of Vintage Kitchen Notes and Amy of Bake with Amy. You can visit their blogs for the recipe for these popovers. Make sure you also check out the Tuesdays with Dorie site to see the links for all of the TWD bakers.

Now, it’s been too warm in my home and not much cooking has happened lately. I had planned to make these to serve with dinner, but I just make them and had them on their own. I halved the recipe as there is just the two of us and popovers need to be eaten immediately. I used a muffin pan and ended up making 6 popovers. I put the pan in the oven while the oven came to temperature, as I had seen others do this on TV and in cookbooks, and that seemed to work very well. Don’t butter the pan before you heat it or you will have burnt butter. Oops.

The popover batter takes about 30 seconds to put together in the food processor. I then put the batter in a measuring cup with a spout so I could pour the batter into the hot pan while it was still on the oven rack. I baked mine the 25 minutes at 425 degrees and then 15 minutes at 350 degrees and I think mine were overbaked. I think maybe using the hot pan made it cook more quickly. Still, they rose beautifully and were lovely and hollow on the inside. Mine weren’t custardy at all inside. They were very good and would be best served with some gravy. I liked these and I was thrilled that my first attempt at popovers was so successful.

Recipe from Baking with Julia by Dorie Greenspan, page 213
Posted by Nicole at 6:00 AM

The baking time was an issue for me too, and I didn´t preheat the pans. Lovely popovers and glad you liked them!

Didn't preheat my pans either, but I baked them for much less than what was suggested. Beautiful job, Nicole! :)

Don't you love it when a first attempt is successful. Just makes you want to do the happy dance! Loved these little gems!

We loved these too. I ended up covering them with foil for the last ten minutes so they would not brown too much on top. It's great when a recipe is so tasty as it is simple!

It sounds and looks like they came out perfectly. I didn't preheat either!

Nice job - I think I'll take the time to preheat the pans next time, as ours stuck a little bit.