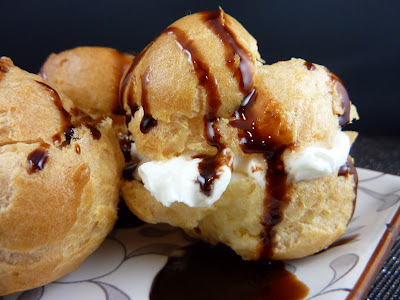 For this round of the recipe swap, the theme was desserts. As you can imagine, it was really hard for me to select just one recipe to submit! I was super excited to see what recipe I got as I love to try new things. I got this recipe for profiteroles from A Taste of Home Cooking, which was great as I had never made them before. These are filled with ice cream, but I had planned to make some custard to serve mine with. I ran out of time and ended up just filling them with whipped cream.

I ended up making a half a batch of profiteroles, which was a little tricky. I think that it would have been easier to blend with my hand mixer had there been more dough to work with. But I kept beating until the dough came together. I’m not sure if it was shiny, but it seemed good to go. I scooped mine on the baking sheet and hoped for the best. I made mine a little bigger, as I only made 10 puffs.

When they came out of the oven, they were so beautiful! So nice and puffy and light. I had forgotten to brush them with egg wash before baking but that didn’t seem to make a difference. When I cut them open to serve, they were nearly hollow inside, leaving plenty of room for the filling. The puffs themselves are fairly plain, but when paired with the cream and the chocolate sauce, they make for a lovely treat. Thanks for the recipe Sarah!

In a large heavy saucepan, combine the butter, 1 cup water, and salt; bring to a boil over high heat, stirring until butter melts. Reduce heat to medium and add the flour. Cook, stirring with a wooden spoon, until mixture pulls away from the sides of the pan and forms a ball, about 1 minute. Remove from heat; cool 1 minute.

With an electric handheld mixer, beat in eggs, a little bit at a time, until completely incorporated. Dough should look shiny.

Drop or scoop heaping tablespoons of batter onto baking sheets, about 2 inches apart. Using a pastry brush, lightly brush puffs with egg wash. (I totally forgot to do this!)

Bake, rotating sheets between racks halfway through, until puffed and brown, about 25 minutes. Remove them from oven and turn the oven off. With a toothpick, poke a hole in each puff. Return to oven (still off) for 10 minutes.

When cool, halve each puff horizontally with a serrated knife. Place a small scoop of ice cream or whipped cream (2 to 3 tablespoons) in each bottom half. Replace tops; press gently. If filling with ice cream, freeze for 1 hour; refrigerate if filled with whipped cream.

Make the fudge sauce: In a small saucepan, combine corn syrup and chocolate. Stir over medium-low heat until smooth, 4 to 5 minutes. Remove from heat. Whisk in heavy cream until smooth. Serve right away, or let cool to room temperature before transferring to an airtight container.

To serve, arrange the puffs in a bowl or on a plate and drizzle with fudge sauce. Serve immediately.

Recipe from A Taste of Home Cooking

They look awesome! I'm glad you enjoyed them. :)