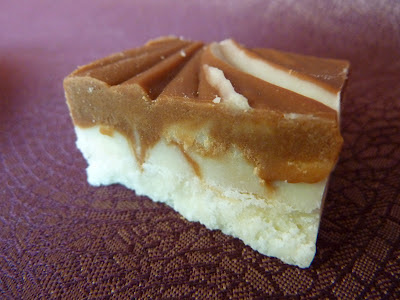 This round of the recipe swap is Blogger’s Choice, where I get to select a recipe from the blog I got in the swap. I got Lisa’s blog Tastetastic Voyage and I looked and looked to find which recipe to make. I thought about making cookies, but I always make those. I thought about making the cabbage/pasta dish, just because it sounded different. But I ended up choosing the Root Beer Float fudge. 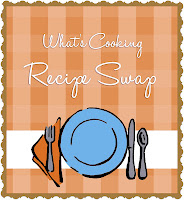 My dad is the fudge expert in my family; he makes several different types of fudge at Christmas and everyone in the family looks forward to his fudge. I have helped Dad make fudge once or twice, but in general I don’t have experience with fudge. This recipe, which uses marshmallow cream, is fairly similar to the recipe that my dad uses as his also uses marshmallow cream. His original recipes used the microwave, but this recipe uses the stove and after talking to my dad, he also now uses the stove for more consistent heat.

This recipe is fairly quick to make, but you do have to hang out and stir the mixture on top of the stove. My arm got pretty tired stirring in the white chocolate chips and marshmallow cream, and I wasn’t sure that it was 100% smooth. I went ahead anyway and it seemed to turn out ok. The mixture is so thick that it’s hard to swirl. It cut beautifully and the flavors are really spot on. It’s really sweet, but it’s fudge so that’s expected! Thanks for a great recipe Lisa!

Line a 9” x 13” pan with parchment paper and set aside. For ease of preparation, have all the ingredients on hand and measured out, ready to go.

In a large saucepan, heat sugar, butter, salt and cream until combined. Bring to a boil and stir continuously for 4 minutes.

Remove from heat. Quickly stir in white chocolate and marshmallow cream. Stir in vigorously until smooth, a couple minutes.

Pour half of mixture into the prepared pan. Whisk the root beer concentrate into the remaining fudge. Pour over the white fudge, and using a knife, swirl the two together.  Refrigerate 4 hours or overnight before cutting into pieces.

I second that, sounds amazing!!