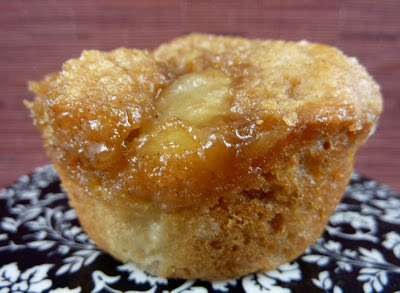 Pear and ginger seemed like the perfect combination. I had some pears that I didn’t take with my lunch and I wanted to bake with them as they were getting too ripe. I wanted to make muffins so I did a search and came up with these. They were simple but with the added ginger and crumb topping to make them special. I also came across some pear gingerbread muffins, but I’m holding off on the Christmas stuff for now. Trust me, I have many gingerbread and eggnog recipes ready to go.

I had to adjust the ingredients a tad as I was short on vegetable oil, so I used half oil and half melted butter. I used plain Greek yogurt for the sour cream, and I realized as I was writing up this post, I used ½ cup instead of 1/3. I need to be more careful when I am baking! I think I would cut the pieces of pear a lot smaller, maybe about 1/3 inch pieces. My pieces were too big and so the pears weren’t well distributed in the muffins.

I had a little problem with the crumb topping melting all over the pan, so maybe my butter was too soft that I used for the topping. They were also quite soft, maybe because I used too much Greek yogurt in the batter! I made a total of 9 muffins, so this is perfect small batch baking. These are best straight out of the oven, when they are warm. They taste a lot like hot apple (pear) pie, which is one of my favorite desserts!

Divide the batter between the prepared muffin cups, filling about ¾ full.

Prepare the crumb topping: in a small bowl combine the brown sugar and ginger. Cut in the butter until the mixture resembles crumbs. Top the muffins with the crumb topping.
Bake for 20-25 minutes, until the tops are brown and firm to touch. Cool in the pan for 10 minutes before removing to a wire rack.

Recipe from Not the Kitchen Sink
Posted by Nicole at 6:00 AM

I am so loving pears this fall! Can't wait to try these.