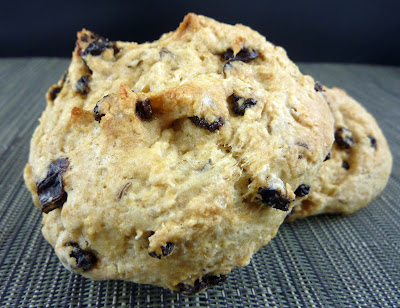 St. Patrick’s Day is close so you are likely seeing many recipes for Irish Soda Bread. I have made Irish Soda Bread before, as part of Tuesdays with Dorie, but I wanted to try something different. We usually think of soda bread with raisins or currants, but that isn’t really authentic. I’m ok with not having 100% authentic. I figure everything I made is Americanized anyway!

This recipe is more traditionally American, but I don’t think that I have ever seen caraway seeds in a recipe for soda bread. I’m used to caraway seeds in rye bread, but this was a new idea. Otherwise, this bun recipe was what I was familiar with for soda bread: flour, wheat flour, currants. I made mine completely in a mixer, even though the original recipe had you cut in the butter by hand. I find that the mixer is fairly efficient, and it’s not as messy.

I made these buns to have with a corned beef and cabbage slow cooker dinner. Dinner didn’t turn out so well (how could vegetables cooking in a slow cooker for 9 hours still be hard?), but these buns are really lovely. The caraway seeds are…interesting. I think I would leave them out next time. It’s the wrong flavor to add to what is a fairly sweet roll. They are especially good with honey butter. You’ll want to bake and eat them within a fairly quick time frame. The ones fresh out of the oven were the best, an hour later they were still good but not quite as great.

Preheat oven to 375 degrees. Line a baking sheet with a silicone baking mat.

In a large mixer bowl, combine the flours, sugar, baking powder, salt and baking soda. Add the cubes of cold butter, and mix until the mixture looks like coarse crumbs. In a small bowl, whisk together buttermilk and egg. Add the buttermilk mixture to the mixer bowl and mix just until incorporated. The dough with be wet and a bit shaggy. Stir in the currants and caraway seeds (if you’re using them).

Turn the dough out onto a lightly floured surface and shape into a 1-inch thick round. Cut into 8 wedges and then shape each wedge into a ball. Place on the prepared baking sheet. Cut a small “x” in the top of each bun and then brush with a little milk.

Bake 20-24 minutes, until the buns are golden brown. Cool 10 minutes before serving.

Recipe from The New York Times
Posted by Nicole at 6:00 AM