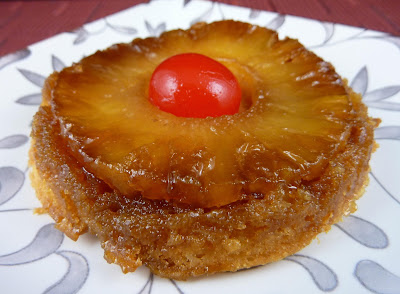 I’m calling these mini cakes because I found it more viable to eat them off a plate with a fork. You could pick them up and eat them like a donut, but that would be messy. I usually pipe donut batter into the pan, as the most efficient way to make sure the donut had the right amount of batter. I was out of piping bags so I used two spoons to spread the batter in the pan. This worked but I don’t think I got the batter in the pan as evenly.

Make sure that you get the brown sugar/butter mixture evenly spread in the bottom of the donut pan. That is really what makes the upside down cake so good. Slicing the ring apple rings is a bit of an art, but they really don’t need to be perfect. Once the cakes/donuts are baked no one will ever know if the pineapple ring wasn’t perfect. I really liked these, as a nice little dessert. They took no time to put together and you get to eat them straight from the oven!

Preheat the oven to 350 degrees. Have two donut pans ready.

In a small saucepan, melt the butter over low heat. Stir in the brown sugar until it is moist. Divide the mixture between the donut pans and squish it around so that the entire bottom of the donut ring is covered. Drain the pineapple slices and slice the rings in half horizontally to make thinner rings. Place one slice in each donut pan, on top of the brown sugar/butter mixture.

In a large mixer bowl, beat the butter and sugar until light. Add the egg and stir until combined.

Divide the dough between the pans, filling about 2/3 full. Bake for 18-20 minutes, until golden brown. While the pan is still hot, gently invert the donut pan onto a wire rack. Serve immediately.

Recipe from Kitchen Confidante
Posted by Nicole at 6:00 AM