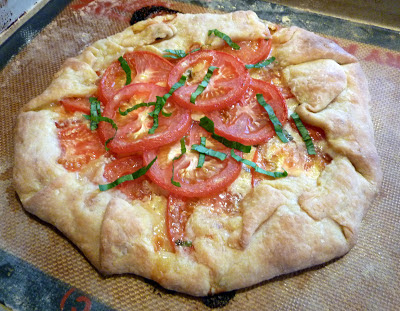 This week’s Tuesdays with Dorie recipe is the Cheese and Tomato Galette. You can find the recipe for this with a quick search online. It is quite simple: galette dough, a sour cream pie crust enhanced with some cornmeal. Roll that thinly, top with cheese, basil, and the best tomatoes you can find! The galette makes for a nice light dinner, which is what we did at out home! Don’t forget to check out all of the links left by the other Tuesdays with Dorie bakers on the Tuesdays with Dorie site .

I didn’t change this recipe up all that much. My only change was using cheddar cheese in place of Monterey Jack cheese, as I had that on hand already. I made a trip to the local farmer’s market in hopes that they would have tomatoes. I was in luck because I did find some there. It’s pretty early for tomatoes in the Pacific Northwest, but I took what I could find. They were very nice, but you get even more flavorful tomatoes later in the summer. I was even able to find local basil, and it was the nicest basil I have ever used.

I made the galette dough in the food processor, which is a lot easier as this dough is fairly sticky. I also made sure that I used lots of flour on the counter when I rolled out the dough. The assembly is quick and then just a short while in the oven. I liked this a lot, but it is fairly rich for a “light” dish. I think next time I would slice the tomatoes a little thinner, but that would be the only change I would make. And now I have some extra galette dough in the refrigerator to make another treat.

Recipe from Baking with Julia by Dorie Greenspan, page 429
Posted by Nicole at 6:00 AM

Very pretty galette. Yes, it is a sticky dough. Thank goodness for flour.

I agree that it was very good. I might try the food processor next time. The dough was pretty sticky.

Looks great! I loved this recipe and look forward to trying other fillings, as I've got the other portion of the dough sitting in the freezer...just waiting!

Yours looks good, I enjoyed this recipe too.

We're several weeks away from tomatoes in the Northeast too.
Your version looks pretty - such a vibrant red.

Looks great, and I bet it would taste good with any cheese.

The dough was sticky, but it turned out well. Yours looks great!

I went the food processor method for the dough as well. Makes it quick and easy! We enjoyed this recipe too.