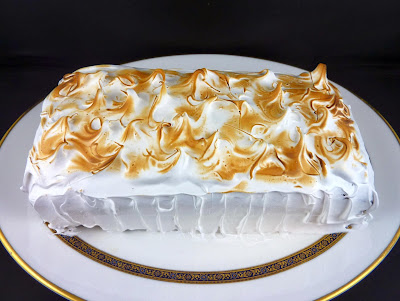 I was home the other weekend and I really wanted to bake something. I looked through a bunch of my recipes and instead of getting ahead with my Christmas cookie baking, I decided to bake this cake. It didn’t look too complex, but boy it sure seems complex when writing up the recipe! It isn’t really too bad, although there are a number of separate steps. And it uses quite a few unusual ingredients.

This is a British recipe, so I imagine these ingredients are common there, but not so much in the States. Black treacle is like a thick version of molasses, so you could use that. Golden syrup is a not as hard to find at the grocery store, but you could use honey or light corn syrup. But look for the golden syrup and you will be glad you did. It comes in a squeeze bottle now which is 1000 times easier to use than the old can! This also calls for stem ginger in syrup, which I have never been able to find and I’ve always passed over recipes using it. My husband finally found it at the gourmet market at Pike Place Market and I am so thrilled! You could substitute candied ginger or perhaps ginger preserves to get the same type of flavor. 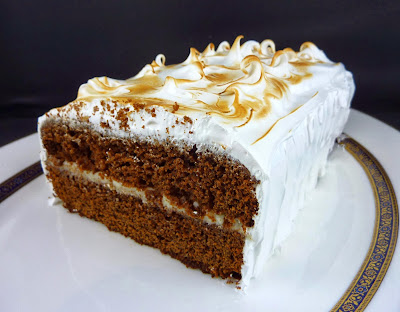 My cake didn’t rise all that much, so I opted to make this a two layer cake rather than a three layer cake. I also cut the ginger filling recipe in half, which is what you see here. The marshmallow filling gave me a bit of stress. I started using a hand mixer and hoped that I could make it completely with that mixer but I couldn’t get it to thicken up enough after removing it from the heat. I transferred it to the stand mixer and that worked. I think I dirtied all the bowls in the kitchen though! Assembled, this ake is very impressive. Anything you toast with a blow torch really is though, isn’t it? Make cake was a touch dry, but I may have baked it a little too long. Otherwise this cake is ready for an event!

Make the cake: Preheat the oven to 325 degrees. Butter a 10” x 5” loaf pan and line with parchment paper.

Place the butter, brown sugar, treacle and golden syrup in a small saucepan. Heat over medium heat until the butter is melted, whisking occasionally. Remove from the heat and allow to cool for 10 minutes. In a medium mixing bowl, combine the flour, baking soda, ginger and cinnamon. Pour in the slightly cooled butter mixture, the milk and the egg yolks. Whisk until the batter is smooth. Pour into the prepared pan.

Bake for one hour, until a cake tester inserted in the center of the cake comes out clean. Cool in the pan for 30 minutes and then remove to a wire rack to cool.

Make the filling: In a large mixer bowl combine the butter, powdered sugar, chopped ginger, ginger syrup and ginger. Beat on medium until smooth. If the filling is too thick, add a teaspoon of milk to thin.

Make the marshmallow topping: Place the egg whites, sugar, water and salt in a medium bowl set over a pan of simmering water; the bowl should not touch the water. Beat with a hand mixer until the mixture is thick, about 4 minutes. Remove the bowl from the heat. Transfer the mixture to a large mixer bowl. Using the whisk attachment beat on high until the mixture is stiff. Put half of the marshmallow topping in a piping bag fitted with a plain round tip.

Recipe from BBC Good Food
Posted by Nicole at 6:00 AM