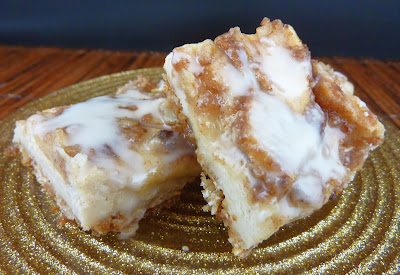 This is some serious fall baking this week. I don’t think you can get more fall that apples paired with spices. Originally these cookies also had a caramel topping, which would be wonderful, but doesn’t travel all that well. Instead I made a glaze with apple cider, which is also perfect for fall.

These cookies have a super long ingredient list, but don’t be too scared. Each layer comes together easily. The base is very, very thin, so don’t worry that it seems like there isn’t enough crumble to cover the bottom of the pan. I was looking at the cheesecake filling ingredients and reading some of the comments on the original blog post and it seemed like it would be too thick and impossible to spread over the super thin base layer. I knew that cheesecake contains eggs, so I added an egg to the filling and that made it more manageable.

For the apple layer, if you wanted to make these bars look great you could arrange the apple slices in neat rows or something, but I didn’t do that. Again, like the base, the apple layer isn’t very thick. My apple topping was a little dry, so perhaps you could add a little more melted butter or even a splash of lemon juice. These bars are quite messy to cut, but the flavors are just great.

Preheat your oven to 350 degrees. Line a 9” x 13” pan with foil and spray the foil with nonstick cooking spray.

In a medium bowl, stir together the brown sugar, graham cracker crumbs, oats, and melted butter. Press evenly into the prepared pan. Bake for 5 minutes.

In a large mixer bowl, beat the cream cheese, egg, corn starch, sugar, brown sugar, cinnamon, ginger, and vanilla. Pour over the partially baked crust and smooth into an even layer.

In a medium bowl, stir together the flour, oats, brown sugar, cinnamon, and melted butter. Once combined, add the sliced apples and stir to coat the apples in the mixture. Place the sliced apples over the cheesecake layer.

Bake for about 40 minutes, until the filling is set. Allow to cool for 15 minutes at room temperature and then refrigerate overnight.

Make the glaze, in a small bowl, whisk together the powdered sugar, vanilla, and enough apple cider to make drizzling consistency. Drizzle over the bars. Allow the glaze to set before cutting into bars.

Recipe from Sugar Apron
Posted by Nicole at 6:00 AM