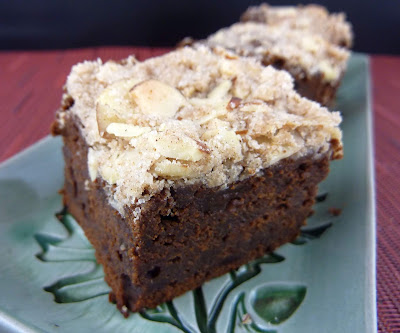 My husband and I subscribe to a couple of British cooking magazines. It’s interesting to see how often they have similar recipes. This year, I came across two versions of mince pie brownies. I thought that sounded like an interesting combination: rich chocolate combined with the spiced mincemeat flavor. One of the recipes had you chop up mincemeat pies, and the other just used the mincemeat filling. I typically have mincemeat on hand, as I regularly make mincemeat pies for Christmas, so I went with the recipe that just called for the mincemeat.

This recipe is from an advertisement in one of the magazines. It’s a traditional brownie with a crumb topping. Brownies can get their chocolate in different ways: cocoa powder, unsweetened chocolate, or dark/semi-sweet chocolate. This recipe uses a combination of cocoa powder and dark chocolate. That makes sense as the advertiser makes both chocolate and cocoa powder!

The original recipe made the brownies in a 25 cm square pan, which is a little smaller than a 10” square pan. Given that this recipe used 6 eggs, 300 grams (10+ ounces) of chocolate, and 2 sticks of butter, it seemed like that would be too much batter for that size of pan. I decided to use a 9” x 13” pan, which has a slightly larger surface area. There was so much batter that it was no problem at all. This brownie batter is quite heavy, but bakes up into a nice, dense brownie. These brownies are very rich, with an intense dark chocolate flavor.

Make the crumb topping: in a small bowl, combine the first list of ingredients. Rub the mixture together with your fingers until the mixture forms crumbs. Refrigerate while you prepare the brownies. In the top of the double boiler, combine the dark chocolate and butter. Over simmering water, melt the butter and chocolate, stirring until smooth. Remove from the heat and allow the mixture to cool slightly.

In a large mixer bowl, combine the eggs and sugar. Mix on medium until pale and frothy, between 5-8 minutes. With the mixer running, gradually add the chocolate mixture. In a small bowl, whisk together the flour, baking powder, cocoa powder, and salt. With the mixer running on low, gradually add the flour mixture. Stir in the orange zest and mincemeat; stir until incorporated. Spread the batter into the prepared pan. Sprinkle with the crumb topping.

Bake for about 45 minutes, until a thin knife inserted into the brownies comes out nearly clean. Allow the brownies to cool completely before cutting into bars.

Recipe from Dr. Oetker
Posted by Nicole at 6:00 AM