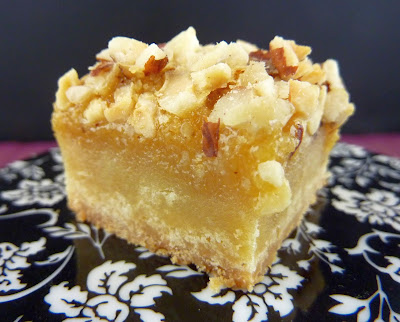 Each year for Christmas, my husband makes a traditional British Christmas cake, which is a fruitcake. His fruitcake is a little different each year, depending on which dried fruits are used and whether he adds nuts. He doesn’t add any candied fruits, which is what you often come across in American fruitcake. This year he used hazelnuts in the cake batter.

After the cake is baked (and is doused with alcohol for a bit) it is covered with jam, a layer of almond paste, and then covered with royal icing. Since he used hazelnuts in the cake, he decided that he wanted to make his own hazelnut paste. Hazelnut paste isn’t too complex, just hazelnuts, egg, and sugar for the most part. The recipe made much more than was needed for the Christmas cake. I wanted to find a cookie recipe that used the remaining hazelnut paste.

Most of the recipes that use almond paste are amaretti, and I have made those before. I found several variations of this recipe online, a cookie base with a marzipan topping. You could certainly use almond paste and chopped almonds if you don’t have hazelnuts on hand. I used a 9” pan, instead of the 8” pan that the original recipe called for, and the bars are plenty thick. I reduced the amount of chopped nuts in the recipe here to ½ cup, as the 1 cup in the original recipe was a lot. You’ll want to cut these bars small as they are very rich and very gooey.

Preheat the oven to 350. Line an 9-inch square pan with foil and spray the foil with nonstick cooking spray.

In a large mixer bowl, beat the butter and brown sugar on medium until fluffy. Add the egg, vanilla and hazelnut extract and mix on medium to combine. With the mixer running on low, gradually add the flour, stirring until the dough comes together. Pat the dough evenly into the prepared pan.

While the base is baking, make the topping: in a large mixer bowl, beat the hazelnut paste, brown sugar and egg until combined.  When the base comes out of the oven, spread the topping on the base and then top with the chopped hazelnuts.

Bake for about 20 minutes, until the marzipan topping is browned and set. Allow to cool completely before cutting into bars.
Recipe from Just About Baked
Posted by Nicole at 6:00 AM