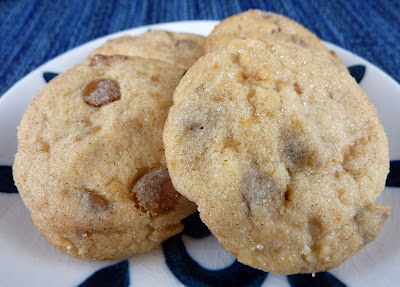 Hi everyone, I am back! You may have wondered where I went, but I haven’t talked about it very much. On April 20 I had a stroke. I thought I was fine, but a couple of days later I was in such rough shape that my husband had to call the paramedics. I was then in the hospital for 4 days and I’ve been recovering at home ever since. I returned to work this week, and it’s been good. I do get tired and I’m fairly slow, but I am on the mend. These cookies are the first thing that I have baked since.

This recipe is from a new magazine that I picked up called Bake from Scratch. It has great recipes and I wanted to make something from it for my first week back. This recipe started as salted caramel snickerdoodles, but I had some trouble with the recipe and ended up doing my own thing. I used some of the same ideas, but things didn’t quite turn out as expected.

You start with making caramel. I burned the first batch and then the second batch wasn’t smooth, but I didn’t want it to burn. I decided that I would use the caramel powder and then use caramel bits. I ended up not having caramel bits, so I used cinnamon chips instead. So now these are just cinnamon caramel cookies. They aren’t quite what I would call snickerdoodles, but I still like them! They look a lot like snickerdoodles with chips, but the dough also has the caramel powder, which provides an interesting flavor to these cookies.

Make the caramel: place the sugar in a medium saucepan and heat on medium, stirring occasionally, until smooth. Once smooth, spread the caramel on a baking sheet and allow to cool completely. Grind enough of the caramel to make ½ cup caramel powder.

In a large mixer bowl, combine the caramel powder, butter, sugar, and brown sugar. Beat on medium until smooth. Add the egg and vanilla and mix on medium to combine. In a separate bowl, whisk together the flour, baking soda, salt, and cinnamon. Gradually add the flour mixture, with the mixer running on low. Stir in the cinnamon chips.

Shape the dough into 1-1/4” balls and roll the balls in cinnamon sugar. Place the dough on the prepared baking sheets and flatten slightly with the back of your hand.

Bake for 11-12 minutes, until set. Allow the cookies to cool on the baking sheet for at least 5 minutes before removing to a wire rack to cool completely.

*I had difficulty with the caramel, as it would burn before melting completely. I allowed the caramel to cool before it was smooth, and all I could muster was about ½ cup of caramel powder.

Recipe from Bake from Scratch
Posted by Nicole at 6:00 AM