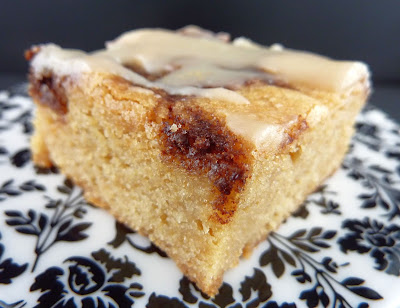 I found this recipe online, although it seems like it would be perfect for the Fall Baking magazine that I bought recently. While I had looked there for a recipe, this week I really wanted to make bar cookies. I figured these cinnamon roll blondies would be perfect. When you look at the list of ingredients, it seems daunting, but they come together quickly. I often make bar cookies a day in advance; I didn’t do that this time, but I still had plenty of time.

The blondie in this recipe is quite thin, and it isn’t all the easy to spread the small amount of batter into the pan. Don’t worry about it being perfect, as it evens out when they bake. I wish I would have distributed the cinnamon topping better, but it’s runny and it had a mind of its own. I wish there would have been more icing, but I was too generous at first, I suppose! These bars are cake-like, so they cut easily! I’m not kidding, but the cinnamon topping is intense, but the bars would be lacking without it.

In a large mixer bowl, combine the melted butter and brown sugar. Add the eggs and vanilla and beat on medium to combine. With the mixer running on low, gradually add the flour, baking powder, and salt, mixing just until the soft dough comes together. Spread the dough in the base of the pan.

Make the cinnamon topping: in a small bowl, whisk together the brown sugar, cinnamon, and melted butter. Drop the cinnamon mixture onto the dough and swirl with a knife.

Bake for 18-20 minutes, until lightly browned along the edges.

Once the bars are cool, make the icing. In a small saucepan, combine the butter, sugar, heavy cream, water, vanilla, and corn syrup. Heat on medium-low until the sugar melts; increase the heat to medium and bring to a boil. Boil for three minutes, then remove from the heat. Whisk in about ¾ cup powdered sugar and then let the icing set for 5 minutes before drizzling over the cooled bars.

Allow the icing to set before cutting into bars.

Recipe from Life, Love, and Sugar
Posted by Nicole at 6:00 AM