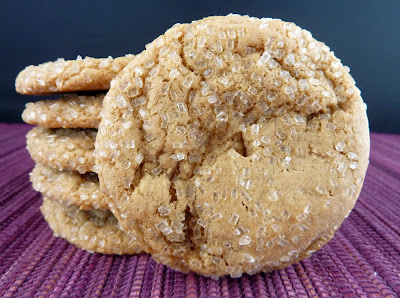 During January I make cookies that are a little less decadent, as it’s nice to have a break from the richness of the holidays. I had pinned this recipe a while ago, and it seemed like a good recipe to make this week. I will say that these cookies look plain, but they are very tasty and my house smelled wonderful while they were baking.

This recipe is a standard sugar cookie/snickerdoodle recipe, but there are a couple of differences. The main one is the use of corn syrup. I don’t know that I have used corn syrup in a recipe before, but I can see how it would make the cookies chewy. I only had artificial maple extract, so I used that. It’s hard to find natural extract and my store didn’t have any so I went with what I had. Maple extract is not maple syrup, so don’t substitute. They won’t taste like French toast if you use maple syrup.

When I made the dough, it was on the dry side, and I wondered if I should have used an entire egg rather than an egg yolk. My recipe made 26 cookies, which is a moderate batch for me. A couple of the cookies spread along the edge, so perhaps they weren’t mixed properly. As they cooled they weren’t as crinkly as I’d hoped, but they have a little crinkle. I think they taste wonderful, despite looking plain, although my husband says they would be better without the sparkling sugar that I used for the covering.

In a large mixer bowl, combine the butter, sugar, and brown sugar. Beat on medium until light. Add the egg yolk, corn syrup, vanilla and maple extract and beat again on medium until well mixed. With the mixer running on low, gradually add the flour, cinnamon, nutmeg, baking soda, and salt. Blend until combined but do not over mix.

Shape the balls into 1-1/4” balls and then roll in additional sugar. Place on the prepared baking sheets.

Bake for 10-12 minutes, until set and lightly browned. Allow the coolies to cool on the baking sheet for 5 minutes before removing to a wire rack to cool completely.

Recipe from Accidental Happy Baker
Posted by Nicole at 6:00 AM