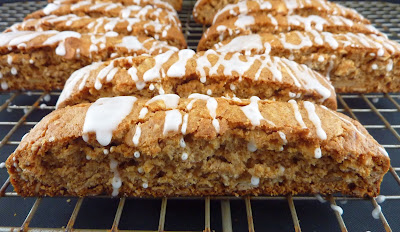 If you are looking for a recipe that makes a small quantity, I encourage you to look at biscotti recipes. I went through Pinterest and identified a couple of different recipes that I thought would be good. With biscotti, you can usually cut the recipe in half and make a smaller batch. In this case, the recipe made just one biscotti “loaf,” which in the end makes just 12 biscotti. That was perfect for what I was looking for.

I don’t make biscotti all that frequently, and that’s for a couple of reasons. I know that some folks don’t like biscotti all that much, or simply want a softer, chewy cookie. I tend to fall in this camp, as I prefer biscotti after it has only baked once, and it is much softer. The other reason is quite silly, but I think that biscotti are the hardest thing to photograph. It doesn’t seem like photos do a good job of capturing the biscotti. This time I photographed the cookies on the cooling rack, which seemed to be the best option.

Biscotti isn’t hard to make, but it does take a little longer since you bake them twice. This uses a small quantity of standard ingredients, so you may be able to make the with what you have on hand. Honey is the most unusual ingredient, but I had just enough for this recipe. Perhaps a trip to the local honey farm is in the plans this weekend! The only change that I made for this recipe is the time spent baking the biscotti the second time. The original recipe had you bake it 25 minutes, but 15 minutes would be better. These cookies aren’t very sweet, and the small amount of glaze helps add a touch of sweetness.

Heat the oven to 350 degrees. Line a baking sheet with a silicone baking mat.

In a medium bowl, combine the flour, oars, baking powder, baking soda, cinnamon, salt, and almonds; set aside. In a large mixer bowl, beat the butter and brown sugar on medium until smooth. Add the egg and beat again on medium. Add the honey and vanilla and stir to combine.

With the mixer running on low, gradually add the flour mixture. With wet hands, shape the dough into a loaf, approximately 10 inches long and 4 inches wide.

Bake for 25 minutes and then remove from the oven. Reduce the oven temperature to 325 degrees.

Allow the biscotti to cool for 5 minutes, and then cut the cookies into ¾” slices with a serrated knife. Stand up the cut biscotti on the baking sheet and bake for an additional 15 minutes. Cool completely.

To glaze: whisk together the powdered sugar and 2 teaspoons milk. Add more milk if the glaze is too thick. Drizzle over the cooled biscotti.

Recipe from My Recipe Reviews
Posted by Nicole at 6:00 AM