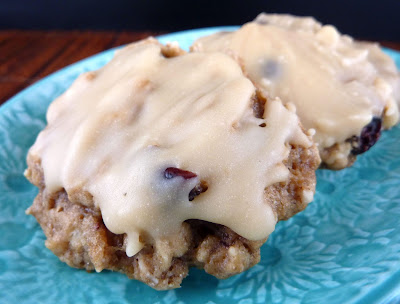 I’ve had these cookies marked for a little while now, and when I was looking through my recipes, I was wondering why I would pin an oatmeal raisin cookie, even one with maple glaze. I was reading through the recipe and I was thinking that I could change it up a little bit. In terms of dried fruits, we have a good variety on hand. We have lots of dried cranberries, so I thought I would try those. I could have used brandy to soak the cranberries, but I looked and noticed we had cranberry liqueur that we purchased last year while on holiday.

Since I am trying to make small batches, I ended up making half of this recipe. The original yield was two dozen cookies, so I figured that half would be perfect. I should have paid closer attention to the amount of flour and oats used, because halving the recipe still made two dozen cookies. I suppose that’s better than 4 dozen, but still a lot. I did make the full amount of glaze.

The cookie itself is quite traditional, with the exception of soaking the fruit in alcohol. If you don’t drink alcohol, you could skip that step, but it does add an interesting flavor. The maple glaze makes these cookies unusual. It is a bit tricky to know when these are baked, as I made mine smaller than the original. At 8 minutes they weren’t done, at 10 they were perhaps too done, but they were good. I needed the entire amount of glaze to top my two dozen cookies. The glaze sets very quickly, so don’t take your time topping the cookies! I spooned on the glaze and then used a brush to smooth it out. The cookies are soft, and the glaze adds a nice bit of sweetness. They aren’t your typical oatmeal cookie, but that’s what I was looking for!


Slightly warm the cranberry liqueur and then remove from the heat. Combine the warmed liqueur and dried cranberries in a bowl. Cover with plastic wrap and allow to sit for at least 30 minutes.

In a large mixer bowl, combine the butter, brown sugar, and sugar. Beat on medium until light. Add the eggs and vanilla and mix on medium to combine. In a separate bowl, combine the flour, oats, baking soda, and cinnamon. With the mixer running on low, gradually add the flour mixture. When almost combined, drain the dried cranberries and add them to the dough. Mix on low until incorporated.

Wrap the dough in plastic wrap and refrigerate for at least an hour.

Shape the dough into 2” balls and place on the prepared baking sheets. Flatten the dough balls slightly with the palm of your hand.

Bake the cookies for 8-10 minutes, until lightly browned. The cookies may look under baked but will set as they cool. Cool for 10 minutes on the baking sheet, and then remove to a wire rack to cool completely.

Once the cookies are cool, make the glaze. In a small saucepan over low heat, melt the maple syrup and butter. Once melted, remove from the heat and whisk in the powdered sugar. Top each of the cookies with a small amount of glaze.