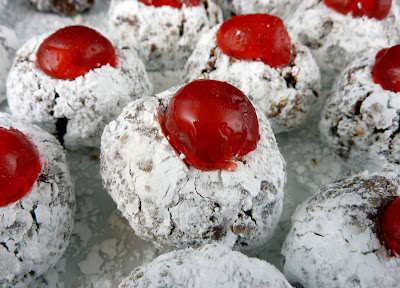 It’s not uncommon for me to make some sort of no-bake rum/bourbon balls, and I am frequently looking for new recipes to try. I came across this recipe a while ago, and it’s quite different from previous versions I have made. My go-to recipe uses gingersnap crumbs, and that is the predominant flavor. This version uses vanilla wafer cookies and is topped by a festive red candied cherry.

Since I am doing smaller batches this year, I had originally planned to make a half batch of these cookies. My husband asked if I could use the cranberry liqueur, as we had picked that up at a local distillery last year and we still had some available. I ended up making a full batch, but I divided it in two, adding rum to half of the mixture and cranberry liqueur to the other half. It doesn’t take any longer, but it sure did mess up more dishes!

Like other rum balls, these are best if you make them and the stick them in the refrigerator for a while for the flavors to come together. I’ve kept the two flavors separate, as the do taste a bit different. The strangest thing for me is that I almost never used candied fruit when baking. Occasionally I will use a little candied peel (which is common in British baking), but there was no way around the candied cherries in this recipe! They add a beautiful festive touch, and while the cookies could like without them, why would you want to do that?

Cherry Rum Balls
1 cup chocolate chips
½ cup rum
¼ cup light corn syrup
3 cups vanilla wafer crumbs
1 ½ cups chopped pecans
1 cup powdered sugar, divided
24 red candied cherries, halved
In a small saucepan over medium heat, melt the chocolate chips. Remove from the heat and stir in the rum and corn syrup; set aside.
In a separate bowl, stir together the vanilla wafer crumbs, pecans, and ½ cup of powdered sugar. Drizzle with the chocolate mixture and stir well to combine all ingredients.
Shape the dough into 1-inch balls and roll in the remaining powdered sugar. Top each ball with a cherry half, pressing down to adhere. Store the balls in an airtight container in the refrigerator. Allow the cookies to set for several days, allowing the flavors to develop.

Recipe from All Recipes