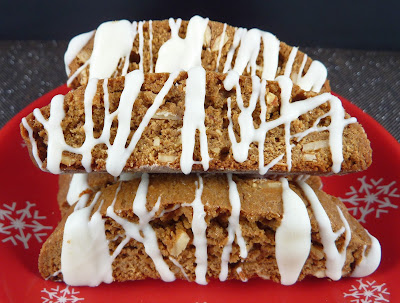 If you’re in a rush this holiday season, biscotti are a great cookie to make. While not everyone in my family is the biggest fan of biscotti, I do like them. I also find that homemade biscotti isn’t nearly as dry as biscotti you get from a store, and I don’t want my biscotti to be too dry. I found this recipe and thought it was interesting, with the added spices and molasses that make it gingerbread. The original recipe called for macadamia nuts, but I used sliced almonds. Feel free to use whichever nut you like!

Biscotti are a good time-saver because you make the dough, shape into a log or two, bake, slice, then bake again. It may seem like many steps, but it isn’t at all. Being able to bake all of the cookies at a time is a lot quicker than having to bake up different batches of cookies. Since I made a half recipe, I just shaped the dough into one log and baked it up. Wow did my house smell good while these were baking!

As I don’t like biscotti that is too dry, for the second bake I baked the biscotti for 15 minutes, rather than 30. They were already on the dry side when I sliced them, so I didn’t want to go too far. Be careful when cutting them into pieces, as they can be crumbly. One biscotti broke in half completely and another crumbled at the edge. Thankfully, the rest were ok. The white chocolate adds a nice sweetness and makes the biscotti a little bit fancier.

Heat the oven to 350 degrees. Line a baking sheet with a silicone baking mat.

In a medium bowl, whisk together the flour, baking powder, ginger, cinnamon, cloves, and salt; set aside. In a large mixer bowl, beat the butter and brown sugar on medium until light. Add the egg, stirring until well combined, then add the molasses. With the mixer running on low, gradually add the flour mixture. Once the dough has come together, fold in the almond to distribute evenly though the dough.

Shape the dough into a flattened log, about 12 inches long and 2 inches wide. Place on the prepared baking sheet.

Bake for about 30 minutes, until the dough looks dry. Allow to cool for 10 minutes. Reduce the oven temperature to 275 degrees.

Slice the dough into biscotti with a serrated knife, each cookie about ½” wide. Place cut-side down on the baking sheet.

Bake for an additional 15 minutes, or longer if you like especially crispy biscotti. Allow to cool.

Recipe from Flavor the Moments