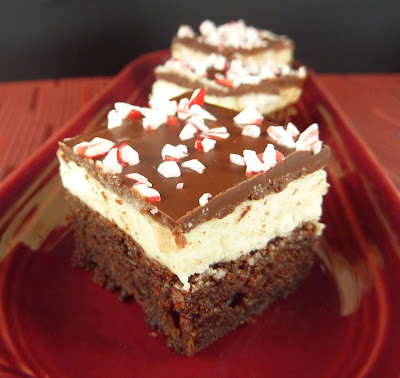 I don’t make good old-fashioned brownies all that frequently, so this recipe for peppermint bark brownies looked great! I do think that peppermint is a critical flavor of the season, and who doesn’t like brownies? This was a small batch recipe, baking in an 8” square pan, so that was perfect. We’re getting so close to the holiday and I’ll be honest, my kitchen is full of many different treats.

While this is a small batch of brownies, they call for quite a few ingredients. First the brownie layer, which is a one-bowl brownie, then the frosting and finally the peppermint bark. I have some friends who are absolute connoisseurs of peppermint bark, but I am not. I love peppermint bark and will eat it no matter the variety. I’m not sure that melted chocolate topped with crushed peppermints is exactly peppermint bark, but it works for this recipe.

It is important to let the brownies cool before frosting and topping with peppermint bark, and as such I made these brownies over two days. That also gave me time to wash my mixer bowls, as the two that I have is too few this time of year! I had planned to add some coffee, as that makes the chocolate taste more chocolaty, but I was out. I figured the peppermint would carry the day. The steps for these brownies are not difficult, but I did let the chocolate set and thicken slightly before adding it to the top of the bars. I didn’t want the chocolate to simply run off the sides! These brownies are a perfect mix of chocolate and peppermint, not too strong, but with clear flavors of the season.

Heat the oven to 350 degrees. Line an 8” square baking pan with foil and spray with nonstick cooking spray.

In a large mixer bowl, mix the melted butter, oil, sugar, eggs, vanilla, peppermint extract, salt, and coffee. Mix on medium until combined. Add the cocoa powder and flour and stir on low to incorporate. Spread the mixture in the prepared pan.

Bake for 30-35 minutes, until set. Remove from the oven and allow the brownies to cool completely.

Make the frosting: in a large mixer bowl, beat the butter on medium until light. Add the powdered sugar, peppermint extract, vanilla, and milk and start beating on low and gradually increase the mixer speed until the frosting is light and fluffy. Spread evenly on the cooled brownies. Refrigerate for at least 15 minutes before topping with the peppermint bark.

In a medium microwave bowl, melt the chocolate and shortening, stirring frequently, until smooth. Pour the chocolate mixture over the brownies/frosting and spread to an even layer. Top with crushed peppermints. Refrigerate for at least an hour before cutting into bars.