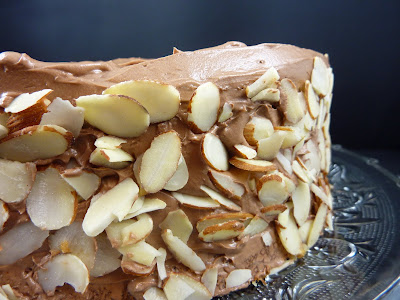 This cake started its life as a Bourbon Ball Cake but I ended up changing it fairly extensively. I really like bourbon balls and I often make those at Christmas. They’re the perfect cookie when you are baking a lot since you can make them early and they get better the longer they sit. This cake called for the bourbon, but other than that I’m not sure how the cake was similar to a bourbon ball. None the less, it looked intriguing and couldn’t wait to give it a try.

This cake was originally a combination of ground almonds, chopped pecans, and bourbon. I wanted to make this more of an almond cake and had hoped to use Amaretto rather than bourbon, but I didn’t have enough on hand. So I kept that the same but didn’t want to have two different types of nuts, so I omitted the chopped pecans that you were supposed to add to the batter. I thought that the cake might not turn out since I had taken out a fairly significant ingredient but I hoped for the best. I also baked this in two 9” pans rather than three. 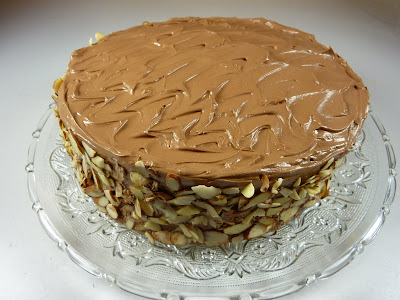 The cake baked up just fine, and in the end the texture was excellent! It was sweet but the almonds added a great flavor. I paired it with the chocolate frosting which was a nice addition. This was a different style of frosting, with a lot of butter, and it was nice and fluffy. The final touch of the original cake was to top it with chocolate ganache, but I skipped that since my ganache didn’t turn out. I’ve made ganache how many times and it didn’t turn out? Oh well, I decorated it with sliced almonds and that added a nice classy touch. I took this to work to celebrate my colleague’s birthday and it was very popular. I think there was only one slice left after I cut the cake!

Whisk flour, ground almonds, baking powder, baking soda and salt in medium bowl to blend. In a large mixer bowl, beat butter and sugar until fluffy. Add eggs 1 at a time, beating until well blended after each addition. Whisk together bourbon and sour cream. Beat in dry ingredients in 3 additions alternately with sour cream mixture in 2 additions, beginning and ending with dry ingredients. Divide batter between the pans.

Bake cakes until tester inserted into center comes out clean and cakes begin to pull away from sides of pans, about 32-35 minutes. Cool cakes in the pans for 10 minutes. Run small knife around pan sides to loosen cakes. Turn cakes out onto racks; peel off parchment paper. Allow cakes to cool completely before frosting.

Place one layer on your cake platter. Top with chocolate frosting. Add second layer and top with frosting. Cover the sides of the cake with a thick layer of chocolate frosting. If desired, push sliced almonds into the side of the cake. Store cake in the refrigerator, but allow it to set at room temperature for at least one hour before serving.

Recipe adapted from Simply Sifted
Posted by Nicole at 6:00 AM