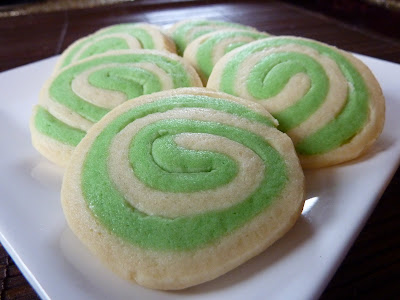 My friend sent me this recipe and I thought it would be a nice festive cookie to make for St. Patrick’s Day! I had made swirl cookies years and years ago and I figured it was high time to make them again. The recipe gave a chocolate variation and a plain variation; I decided to stick with the plain variation. With lots of almond extract in the dough, they aren’t very plain!

Once I started making these, I was reminded why it had been so long. The dough for these cookies is very soft and is tricky to work with. I had to use lots of flour when I was rolling these out since they were so sticky. If I made these again, I think I would decrease the amount of milk in the dough and see if that helped. I did get them together but I extended the refrigeration times to help make the dough easier to handle.

My husband was a bit skeptical about these cookies because he said he’d had them before and they were pretty but didn’t have much flavor. He even liked the dough for these so he thought they were a big improvement. They sliced and baked beautifully, so you almost forget that the dough was a little challenging to work with. Happy St. Patrick’s Day!

In a large mixer bowl, beat the butter and sugar until fluffy. Add the egg and the salt, stirring to combine, and then add the milk and extracts. Gradually add the flour and stir until combined.

Divide the dough into two halves. Color one half with the green food coloring. Pat each half of dough into a rectangle and wrap in parchment or plastic wrap. Refrigerate for at least an hour.

On a lightly floured surface, roll each piece of dough until ¼” thick. My rectangles were approximately 11” x 9”. Place the rolled out rectangles on parchment and refrigerate for about 20 minutes.

Brush the top of the plain dough with beaten egg white. Place the green dough on top and press down. Starting on a long side, roll the dough into a tight swirl. Brush the seam edge with egg white and pinch to seal. Wrap in parchment paper and refrigerate at least an hour.

Slice the dough into ¼” slices and place on the prepared baking sheets. Bake for 16-18 minutes until done but not browned.

Recipe from Ladies Home Journal
Posted by Nicole at 6:00 AM

These are so pretty and perfect for St Pat's Day!