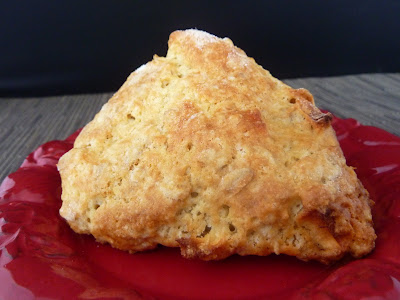 This week’s Tuesdays with Dorie recipe was selected by Patricia from Life With a Whisk. She chose Oatmeal Nutmeg Scones, which are a delightful little scone scented with nutmeg. They’re quite a simple thing, which is the way scones should be. You can get the complete recipe for these scones on Patricia’s blog. Since this is a recipe that lends itself well to variation, you’ll want to check out all the links for this week’s recipe on the Tuesdays with Dorie site.

I like nutmeg, but I wanted to add something to these scones. I had some currants in the cupboard and that was my first thought. I was talking about this with my husband and he thought about adding apple pie filling or something like that since apple, oat, and nutmeg seems like a natural combination. I knew that this dough was super sticky, based on the comments from other bakers, so I thought that might be too gooey. I had some dried apples so I decided to chop those up and add them to the dough. They’re pretty soft so I thought that they might be fairly close to apple pie filling.

I halved the batch but still used a whole egg, so mine were perhaps even softer than the full recipe. The dough is so sticky and I used quite a bit of flour to be able to shape the dough at all. Mine baked quickly and since I had over baked last week’s biscuits, I set the timer at 15 minutes and then baked about 2 minutes more. They were a nice golden brown, but they didn’t keep their shape that well. They’re sort of still shaped like triangles, but not so much. No matter, they are quite good. They aren’t sweet and I’m glad I added the bits of dried apple since they add some sweetness. They'd really be missing something without the dried apple! I can’t taste the nutmeg very much, but other than that I really like these. The oats add a bit of texture and the apples are a nice addition.

Recipe from Baking from My Home to Yours by Dorie Greenspan, page 30.
Posted by Nicole at 6:00 AM

Like the apple addition. I added a little more nutmeg and dates and coarse sugar on top. Just delicious!

My dough was sticky and they baked quickly too...but...the outcome was wonderful! I love these scones!!

Gret idea to add the dried apples. have to try that.

Dried apple would be a wonderful addition to these.