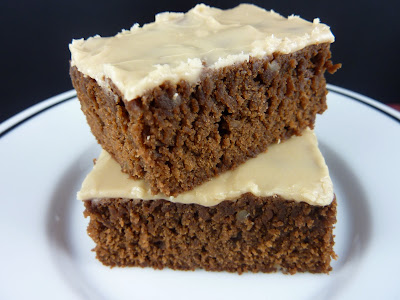 So for this second Friday of boozy cookies in July I decided to make Kahlua Mudslide brownies which have Kahlua, Irish Cream, and vodka. I’ve never had an actual Kahlua mudslide drink, but the brownies sure are good! This recipe comes from a cookbook that I’ve had for years and years, and it includes lots of recipes from different food manufacturers. I’ve made a lot of recipes from this book and the book shows it: it’s all splattered and dirty. Those are signs of a good cookbook!

The base of these is a fairly standard brownie recipe. They aren’t too gooey, so if you’re looking for a gooey brownie, these aren’t them. They have a very cakey texture, which I think is nice with the thin Kahlua glaze. One problem is that they dry out really fast, but with these, I don’t think you’ll need to worry about them lasting too long. I sent them to work with my husband and I think they were gone the next day.

Most of the alcohol bakes out of these, but not all of it so these are a bit boozy. I personally like that but if you’re avoiding alcohol, this wouldn’t be the right choice to make. I’ve actually made these many times, and they’re a great recipe that I keep coming back to. The cookbook also has a recipe for Black Russian brownies and Irish Cream brownies, which I might have a chance to make before the month is over.

In a small bowl, combine the flour, baking powder, and salt. In the microwave or in the top of a double boiler, melt the butter and unsweetened chocolate; set aside. In a large mixer bowl, beat eggs and sugar until light. Beat in flour mixture, chocolate mixture, 4 tablespoons Kahlua, the Irish Cream, and the vodka. Fold in the nuts. Pour into the greased pan.

Bake for 25 minutes, until a toothpick inserted in the center comes out clear. Cool before glazing.

Make the glaze: combine the powdered sugar and the 3 tablespoons Kahlua. Stir until smooth. If required, add milk to thin. Spread over the cooled brownies. Allow the glaze to set before cutting into bars.

Recipe from Favorite Brand Name Cookie Collection
Posted by Nicole at 6:00 AM

I know a lot of folks who don’t eat eggs (they’re allergic, for health reasons, or concerns about animal cruelty). Here’s an awesome site that gives tips on cooking and baking without eggs: http://EggFreeLiving.com