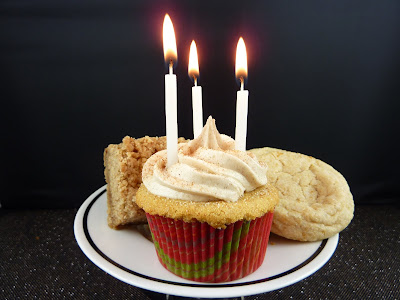 It’s by Third Blogiversary! I’m so happy that so many people drop by and are able to share the different treats that I make. To celebrate, I’ve made three variations of snickerdoodles: my favorite cookie! I’ll post the three over the next three days. First up: snickerdoodle cupcakes!

I’ve long had a handful of snickerdoodle cupcake and muffin recipes bookmarked, and it was really tough to figure out which one to try. I opted for Martha Stewart’s recipe because I’ve had good luck with her recipes and the recipe was quite simple. I didn’t make the seven minute frosting that her recipe called for, I instead opted for a version of the traditional buttercream frosting that I use all the time. This version has cinnamon and also meringue powder, which gives it a little something extra. 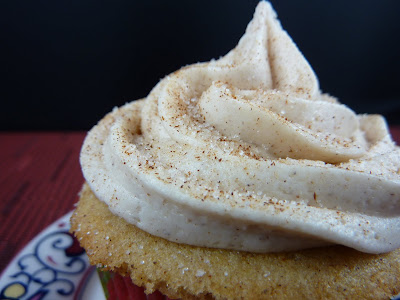 These cupcakes have a great cinnamon sugar flavor! They don’t quite have the same tang that snickerdoodles do, but I can’t really complain. I took these to work and shared them with my colleagues and some of our student workers and they were gone in a very short time. How can you go wrong with something so delicious?

In a small bowl, combine flours, baking powder, salt, and cinnamon. In a large mixer bowl on medium-high speed, cream butter and sugar until pale and fluffy. Add eggs, one at a time, beating until each is incorporated. Beat in vanilla. Reduce speed to low. Add flour mixture in three batches, alternating with two additions of milk, and beating until combined after each.

Divide batter evenly among lined cups, filling each three-quarters full. Bake, rotating tins halfway through, until a cake tester inserted in centers comes out clean, about 20 minutes. Cool in the tins for about 5 minutes and then remove the cupcakes to a wire rack to cool completely. When cooled, frost with snickerdoodle frosting and, if desired, sprinkle with cinnamon sugar.

In a large mixer bowl, beat butter until creamy - about 2-3 minutes. Add sifted powdered sugar, milk, vanilla, meringue powder and cinnamon and beat until combined. Add more powdered sugar or milk to get the desired consistency. Spread or pipe frosting onto cooled cupcakes.

I could go for a snickerdoodle... I might make some cookies after seeing this cupcake recipe. Happy blog anniversary! I've been doing this just for the summer... lets see where I am in 3 yrs. Hopefully sticking with it!!

Happy blogiversary to you! The cupcakes look beautiful - I must try them sometime. My mom is a snickerdoodle fiend and they'd be perfect for her.