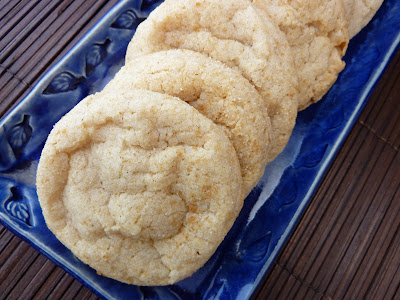 The second snickerdoodle recipe that I made to celebrate the third anniversary of my blog is maple snickerdoodles. I like maple a lot, and it makes me think of fall. As I’ve stated before, I’m so ready for fall and glorious fall baking! These are very similar to traditional snickerdoodles, but add maple syrup to the dough and maple sugar to the cookie coating.

I bought maple sugar this spring when I visited Philadelphia. It looks a lot like brown sugar, just a little lighter in color. My husband had purchased a different type of maple sugar at Whole Foods, but it is much coarser, and I didn’t think that it would work as well, since the maple sugar/sugar mixture needs to be fairly fine. If you can’t find maple sugar, you can order it from King Arthur Flour.

These are simple to put together, which is one of my favorite parts of making snickerdoodles. I like the combination of the cinnamon sugar and maple. The maple addition is subtle, but noticeable. They are lighter in color than traditional snickerdoodles, so it’s a bit of a challenge to know when they are baked through. This recipe makes two dozen cookies; I baked one dozen for about 12 minutes and the second dozen for about 15 minutes. Both are good! Like a chewy cookie? Bake it for the shorter time. Baking longer and the cookie will be crispier. You can’t really go too wrong either way!

In a small bowl, mix the flour, baking powder, baking soda and cinnamon. In a large mixer bowl, cream the butter and sugar. Beat the egg and maple syrup. Stir in the flour mixture.

In a separate small bowl, mix the sugar and maple sugar. Shape the dough into 1-inch balls and roll them in the maple sugar mixture. Place the balls on the prepared baking sheets. Bake until golden brown and cracked on top, 12-16 minutes.

These look delicious! I need to use some maple sugar, and this recipe is sure to delight my family.

That looks delish! I love anything with maple.

How funny - I just bought some maple sugar at our farmer's market (in a Philly burb). Now I know what to do with it!