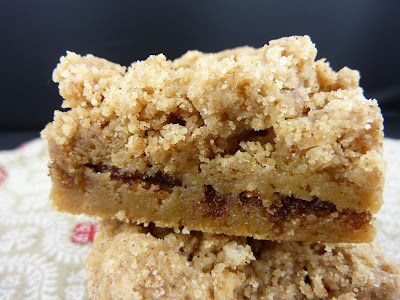 This recipe only makes an 8-inch pan worth of cookies, but they are very substantial. You could cut them in smaller bars, but why would you want to do that? The layer of cinnamon sugar sets them off nicely, but these bars are all about the streusel. When I was making these, I thought that there was an awful lot of streusel for such a small pan, but when they were finished, I realized that was the best part.

The butter and brown sugar flavors are very pronounced in these blondies. You do pick up the cinnamon flavor, but I loved the brown sugar. They are a bit crumbly when cutting, just the nature of the streusel. You probably won’t have to worry about the bars lasting too long, but if you happen to bake these as part of a snickerdoodle baking extravaganza and don’t eat them right away, they will keep for quite a while.

To make the streusel: stir together both sugars, salt, cinnamon, and butter in a medium bowl. Stir in the flour until well combined. Set aside.

In a large mixer bowl, beat together the butter and brown sugar until light and fluffy. Add the egg and vanilla. Mix in the flour, baking powder, salt, cinnamon and nutmeg until just combined. Spread half the batter in the bottom of the prepared pan. Combine sugar and cinnamon. Sprinkle mixture over batter. Drop small spoonfuls of remaining batter on top of sugar mixture. Spread dollops of batter gently to form an even top layer.

Crumble the streusel topping and sprinkle it over the top of the blondies. The streusel layer will be substantial. Bake for 25-30 minutes, until the blondies are golden brown. Allow to cool completely before cutting into bars.