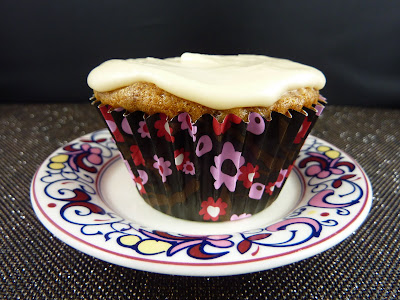 I’ve been on a bit of a glazed muffin kick lately, but these looked so good that I just couldn’t resist. Apple fritters are my favorite donuts (although I really like Old Fashioned and Bismarcks, too) and a muffin based on that sounded so good. Now I know in a bakery that the apple fritters are made with all the scraps of the other donuts once they have been formed, but I don’t like to think of that. An apple fritter is a yummy, wonderful thing.

You cook the apples with butter, sugar, and cinnamon. If you want your house to smell great, just make the first part of this recipe. Wow, my house smelled so good! You then fold the cooked apples into a basic spiced muffin recipe. Very simple but the results are so special. I didn’t have enough glaze for my muffins, so I doubled the recipe for you here.

You may notice that my muffins are a little on the flat side, not domed like you would hope your muffin would be. My ovens been a little bit temperamental for a while now and when I was making these, I think it finally died and just couldn’t get to temperature. So these baked low and slow for a long time, which is why they don’t look quite right. They are cooked all the way through and still taste fine. So the bad news is that my oven is dead. The good news is that 1) I’m not hosting Thanksgiving and 2) a new oven is on the way. New adventures await with the new oven!

Add the diced apples, butter, sugar, cinnamon and water to a skillet and set over medium heat. Cook, stirring occasionally, until the apples are tender, about 8-10 minutes. Let the apples cool slightly then toss them with the flour to coat.

Whisk the flour, baking powder, baking soda, cinnamon and salt in a medium bowl. In a large mixer bowl, mix the applesauce, oil and both sugars until smooth and well combined. Add the eggs, one at a time, beating after each addition. Stir in the vanilla. Alternately add the dry ingredients with the buttermilk, starting and finishing with the dry ingredients, and stirring gently just until the ingredients are combined. Fold in the apples.

Divide the batter among the prepared liners, filling each almost to the top. Bake for 14-16 minutes, or until the muffins are golden and spring back when gently pressed on the top. Let the muffins cool in the pan for 5 minutes before removing them to a wire rack. Let cool slightly while you make the glaze.

To make the glaze: Whisk the melted butter, confectioners' sugar, vanilla and water in a small bowl until smooth. Dip the muffins in the glaze. Allow to set, then dip a second time and let harden again before serving.

Recipe from Tracey’s Culinary Adventures
Posted by Nicole at 6:00 AM