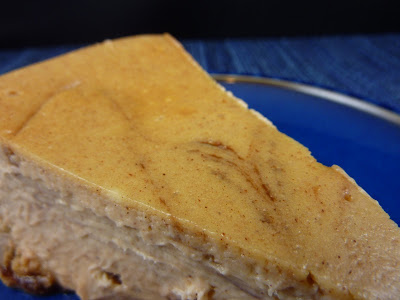 For Tuesdays with Dorie this week, we got to do a rewind, which means we can remake a favorite or make one of the recipes that you hadn’t made when it was picked. I let my husband pick the recipe this week. My cookbook is marked with the recipes that I’ve made and which ones I haven’t. He picked the Brown Sugar Apple Cheesecake.

This recipe was chosen was back in February 2008, when Tuesdays with Dorie was still in its infancy. I think it was the seventh recipe picked. It was originally picked by Jaime at Good Eats ‘n Sweet Treats and she has the recipe posted on her blog. I’ve followed Jaime’s blog for a few years and I’m not surprised that she picked such a great recipe! Cheesecake with a gingersnap crust and a cooked apple filling. Yum!

Mine came together just fine but I really had a lot of problems cutting it. I’m not exactly sure what went wrong, but the crust hadn’t really set up and the cheesecake seemed too soft in the center, despite being refrigerated overnight. I managed to get one ok-looking piece, but I know it isn’t the best picture. It tastes really good and I love the spiced apple butter with the tang of the cream cheese. Not the best success in the serving department, but really tasty.

Recipe from Baking from My Home to Yours by Dorie Greenspan
Posted by Nicole at 6:00 AM

I missed this one also. We love cheesecake, this looks yummy.
Have a Merry Christmas

I once made that as a birthday-recipe for myself and really loved it.

I remember this one! So delicious! The notes I wrote in the margins of Dorie's book: "Wowzer! This is amazingly good! Scrumptious!" Seeing all these rewind recipes this week has been like visiting old friends.

This recipe is on my short list for Christmas dinner, so I really appreciate your report! Great job this week.

I missed this one..darn cus it sure looks yummy! I made a cheesecake a few weeks ago and I had the same issues with cutting it. It tasted great but it was kinda slimy:)