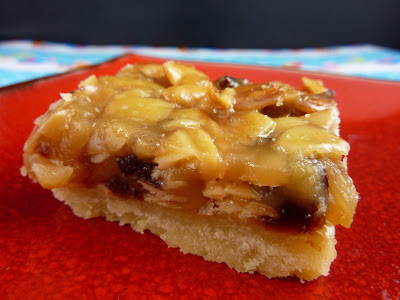 12 Days of Cookies Day 10: Honeycomb Bars. These bars aren’t technically Christmas cookies, but I figured a bar with orange juice, candied orange peel, sliced almonds and dried cherries were inherently Christmas-y. I love bar cookies and hadn’t made but one other bar cookie this Christmas. This starts with sweet pastry dough and is topped with a candy-like combo. Yum!

I’ve been looking forward to making these and have been picking up the ingredients as I’ve been able to. Candied orange peel is not likely something that you have on hand. We sometimes have it in the cupboard, but even the Christmas (fruitcake) we make doesn’t used candied fruits. You can find it at the store this time of year, but the candied fruits are often horribly artificially colored. I picked up this candied orange peel at an Italian grocery store in Pike’s Place Market. It’s really good quality and I think that makes a big difference. Yes, candied fruit should be sweet, but not sickeningly sugary.

I changed this recipe ever so slightly in that I didn’t roll out the dough. I just pressed it in the pan. I also made the dough in a food processor, since that makes the work so easy. Since I wasn’t rolling it out, I didn’t refrigerate the dough. I thought that would save time, but then I was reading the recipe and realized I needed a candy thermometer. Hmm, I used to have one somewhere, but I had no idea where it was so off to the store I went to buy a candy thermometer! These are very sweet, so cut them in small bars. I love the orange flavor combined with the cherries and almonds. These are very candy-like, but so, so good.

Turn out the mixture onto a lightly floured surface and form into an oblong disk. Wrap the disk tightly in plastic and refrigerate for 30 minutes.

Preheat the oven to 350 degrees F. Butter the sides and bottom of a 9-by-13-inch glass baking pan.

Roll out the dough into a large rectangle roughly the shape of the pan. Transfer the dough to the pan, and press into the bottom of the pan (do not press up the sides).

In a medium bowl, toss together the dried cherries, orange peel, cake flour, and salt. Set aside.

In a large saucepan over medium heat, stir together the sugar, heavy cream, honey, and butter. Clip a candy thermometer to the side of the pan and bring the mixture to 240 degrees F. Do not stir the mixture while it is coming to this stage. Once the mixture reaches 240 degrees, add the bourbon and remove from the heat.

Fold the dry ingredients and the almonds into the hot sugar mixture and pour the mixture into the crust. Spread the filling evenly, and smooth the top.

Bake for about 15 minutes or until the bar is golden and bubbly. Remove from the oven and allow to cool completely before cutting.

Recipe from Baked: New Frontiers in Baking by Matt Lewis and Renato Poliafito
Posted by Nicole at 6:00 AM