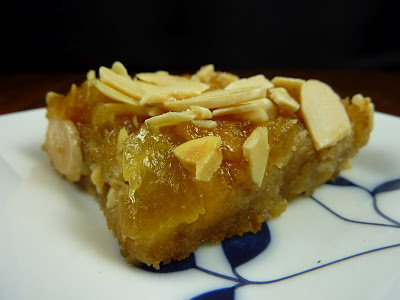 My friends at work know I love baking and one of my coworkers brought me a cookbook that she owned that she thought I would like. It was a cookbook by a British author so the cookies were just a little bit different than the ones you might normally see. It also had some unusual ingredients and I explained what those things were. (What is treacle? It’s like molasses, although I buy treacle at the local British shop.)

I was looking through the cookbook and it seemed so familiar. I know that authors and publishers will sometimes use the same recipes and photos in different books. I found a couple of things that I wanted to try and picked these, which started out as apricot bars. I wanted to not make a mess of my friend’s cookbook so I kept it on the dining room table instead of the kitchen counter where it would be subject to splatters. At one point I decided to look at our cookbooks and I found the one that was similar and found the same recipe so I could have it closer by.

Well, the books aren’t just similar; they are the same book with the same page numbers and everything, just different titles. My book is titled The Cook’s Encyclopedia of Cookies and my friend’s book is titled Best Ever Cookie Book. Things like this drive librarians and catalogers mad because what is the true title of the book? Anyway, these bar cookies called for 1 cup of dried apricots, which I didn’t have. But I had tiny amounts of dried apricot, apple and pineapple that together made a cup. I used that and it was a great way to use of the odd bits of fruit. The crust is very soft after prebaking, but it firms up nicely when fully baked. They have great fruity flavor!

In a food processor, combine the brown sugar and flour. Add the butter and pulse until the mixture resembles crumbs. Press into the prepared baking pan and bake for 15 minutes. Leave the oven on.

While the crust is baking, prepare the topping: combine the dried fruit and water in a saucepan and simmer for about 10 minutes, until soft. Strain the liquid and reserve. Chop the fruits.

Return the fruit to the saucepan and add the zest, sugar, cornstarch and 4 tablespoons of the soaking liquid. Cook for 1 minute. Allow to cool slightly.

Top the partially baked crust with the fruit mixture and sprinkle with the almonds. Continue baking for 20 minutes. Allow to cool in the pan before cutting into bars.

Recipe from The Cook’s Encyclopedia of Cookies by Hilaire Walden
Posted by Nicole at 6:00 AM

that filling looks amazing. however, for some reason to me it is screaming for an oatmeal type of crust. any thoughts on that? would just a basic oatmeal cookie type of dough work? or would it be too sweat?