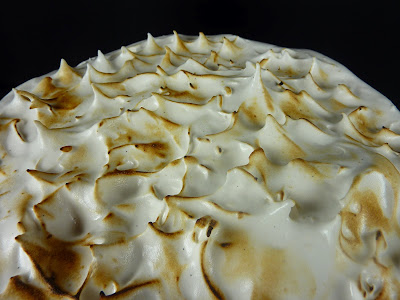 It’s taken me forever to get this recipe posted and I don’t know why because it was such an awesome cake! I made this back in October for someone at work. She had mentioned that she liked to make s’mores at home as a nice little dessert. When her birthday came up, I figured I could find a s’mores cake to make for her. Little did I know that there are tons of s’mores cakes out there! I finally settled on this on, with a graham cracker crust lined chocolate cake, chocolate ganache and marshmallow topping.

This cake is supposed to make a three tiered cake, but I have found those to be so difficult to take to work. I made it just 2 layers and make a smaller cake with the extra batter. The original recipe had you add the graham cracker crumbs to the base of two layers and have one pure cake layer. I had enough crumbs that I put a crumb layer on the smaller cake I made, too. The cakes baked up so nicely and they just looked so great when I took them out of the pan. 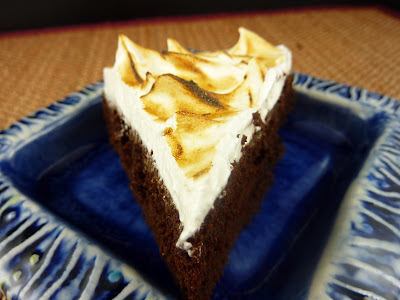 This cake looks quite involved when you read the recipe, but it wasn’t too bad. The cake is pretty easy, ganache always comes together as long as you don’t rush it, and the marshmallow topping was not too bad. I’ve wanted to make marshmallows from scratch but I never get around it to, but if they are similar to making this topping then I’m not so scared. Torching the top of the marshmallows was fun too; never need an excuse to bring out the blow torch! This was a big it at work and my husband also enjoyed the smaller cake that I made for him.

Line two 9″ round pans with parchment paper and then spray with non-stick cooking spray. (Plus I also prepped a smaller 6” pan for the extra batter.) Divide the graham cracker crumbs between prepared pans, pressing them down firmly with a spatula. Set aside.

Preheat the oven to 350 degrees.

Put the cocoa powder in a small bowl, and pour the boiling water on top of it. Whisk the water and cocoa together until smooth, and then set aside until cooled. In a large mixer bowl, beat the butter and sugar together until pale and fluffy. Add the vanilla and the eggs one at a time until they are completely combined.

Bake the cake layers about 25 minutes, until a toothpick inserted in the cake comes out clean. Cool in the pan for 5 minutes and then remove from the pans and allow to cool completely on a wire rack.

Make the ganache: In a small pot, bring the cream to a simmer. Pour the cream over the chocolate pieces and let sit about 5 minutes. Whisk the ganache until smooth and shiny.

Place a cake layer on a cake plate, graham side up. Put a large dollop of ganache on top of the grahams. Spread evenly. Top with the second cake later, graham side up. Cover the sides of the cake with ganache. Refrigerate at least 15-20 minutes.

Make the meringue topping: In a large mixer bowl, whisk the eggs and salt until pale and frothy. Meanwhile, heat the sugar, corn syrup, water and vanilla paste over medium until the sugar is dissolved and just simmering, about 5 minutes. With the mixer on medium speed, add a tiny bit of the hot sugar mixture to the egg whites at a time. Eventually all of the sugar will be added and then turn the mixer up to high. Beat the mixture on high for about 5 minutes or until very stiff and shiny.

Top the cake with the meringue topping. Use a small spatula to create an interesting design with peaks. Using a kitchen torch, brown the meringue, for a nice toasted marshmallow look.

Recipe from Heather Christo
Posted by Nicole at 6:00 AM