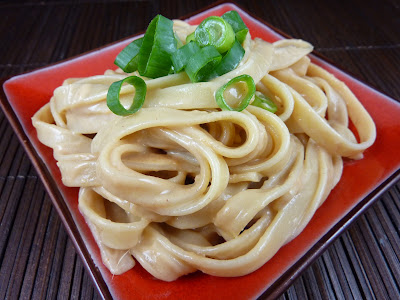 For this round of the recipe swap the theme was noodles. That leads to many, many possible recipes! I got this recipe for cold sesame noodles. I’ve had these before but it had been at least ten years ago so I was eager to make these. I decided to make these for dinner one night and serve them with bbq pork. It was a great dinner.

Years ago I worked in a store deli and my job was to make the salads. One of the salads we made was very similar to this recipe. When I made this I was thinking it would be like that recipe, but that recipe was more soy sauce-based and had a lot less peanut butter. I did go a little light on the peanut butter but that was still the prominent ingredient. I had all the ingredients on hand with the exception of the red chili sauce. I substituted some sweet chili sauce that really didn’t have any heat. It needs a little something so don’t skip that ingredient. (As a side note, I added a touch of the spicy mustard commonly served with bbq pork and that worked quite nicely!)

As always, I have a lot of fun with the recipe swaps and I get the opportunity to try some different things for my blog. Thanks to Sarah from A Taste of Home Cooking for this recipe. She’s the organizer of these swaps and I have such a good time participating. Thanks so much Sarah!

Cook the noodles in large pot of boiling salted water over medium heat until tender. Drain immediately and rinse with cold water until cool. Drain the noodles well and transfer to a wide bowl.

Pour the peanut sauce over the noodles and toss until well coated. Serve garnished with the scallions, sesame seeds, and cilantro.

Recipe from A Taste of Home Cooking
Posted by Nicole at 4:00 AM

I have yet to try cooking any Asian dishes with peanut butter, but they always sound good...and this really sounds good!

These are my favorite cold sesame noodles. I need to make it again soon. I love the peanut butter flavor so I'm glad you toned it down if that's not your favorite flavor. :)